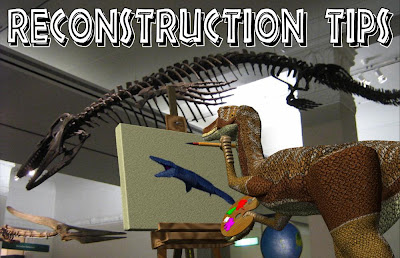 Welcome to the first installment of Reconstruction Tips. Though these articles are bound to take many forms, but my first few entries are going to be a series that follows my real life "adventures" trying to do a palaeo recreation for an actual palaeontologist.


Given the many mistakes I've made along the way, and that it is a whale I'm recreating (well okay Dolphin technically, but they are just small toothed whales in the end...) I've opted to call these tales (or did I mean tails :P)... 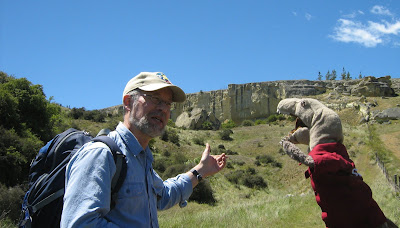 For (nearly) the last year I have been volunteering at the University of Otago's geology department here in Dunedin, doing both field and prep work whenever I can manage the free time (which has become less and less sadly as of late). The fact I'm based here in Dunedin is a real fluke itself, as the Otago University's head of geology, Dr. Ewan Fordyce (pictured here helping out Traumador the Tyrannosaur), is New Zealand's only professional vertebrate palaeontologist, and the University hosts the countries only publicly funded fossil lab.


Dr. Fordyce has been incredibly supportive and patient with me. As an active supporter of popular geology education, Dr. Fordyce has been instrumental in helping me with several projects aimed at kids. For which I can't thank him enough. He has also guided me in improving my fossil collecting and preparation skills to the next level. 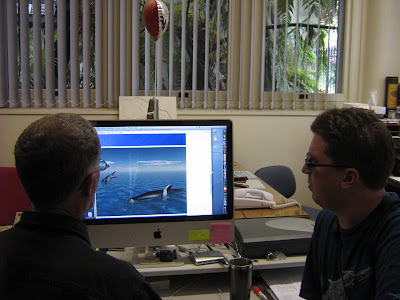 For our purposes here on ART Evolved though, it has been my voluntarily trying to do a restoration of one of his prized "shark toothed" dolphins that we will be concerning ourselves with.

As I established a working relationship with Dr. Fordyce, I saw this as an opportunity to collaborate with a real research scientist and try and get insights into what goes into legitimate scientific reconstructions. Let's say I've learned a lot more then I expected!

It is important to keep in mind that throughout this story, Dr. Fordyce never solicited me for this art. Rather it was I who approached him, and he has been kind enough to indulge me and my mistakes throughout the process. I am not, and was never expecting, to be compensated for these efforts. I simply wanted the chance to work with a real palaeontologist, and get feedback that could eventually help me one day seek out similar gigs. Dr. Fordyce has been more than kind enough to provide me with this "payment"!


Despite not seeking this art out, Dr. Fordyce has expressed an interest in using it in some sort of official capacity. As to what this is I am not currently sure, but I'll be happy with anything!


So with the scene established, we shall start at the only natural point a part 1 of anything can...

Last December I began my volunteer efforts by assisting Dr. Fordyce and a team of honour's students do some field work around Northern Otago. On the drive home I had the privilege of riding shotgun with the good doctor and was able to discuss many things with him on the 2 hour drive (though all his students were too intimidated to sit with him to challenge me for the seat!). One thing that came up was how there were relatively few restorations done of Oligocene whales.

Of course this makes sense, prehistoric whales are not particularly reported unless they still had clear links to their terrestial origin. By the Oligocene period, whales were extremely aquatically adapted and are thus (for whatever reason) not of interest to the general population. This got me thinking that Dr. Fordyce might be in need of illustrations for his specimens. 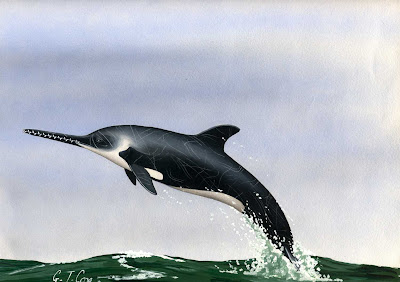 A Prosqualodon by Geoffrey J. Cox from his excellent, but sadly out of print, book Prehistoric Animals of New Zealand (1991)

It turns out there wasn't the complete void of art as I'd imagined from this brief tangent of the car conversation, but regardless this interpretation got my creative juices flowing. I decided I'd throw together a prototype whale over my X-Mas holidays to impress Dr. Fordyce when I started prep work in the lab after New Years.

There was just one "tiny" thing I didn't do before jumping into this project. I did not once remotely think about referencing anything to base my whale on... (in my defence when I did look for some [the subject of Flukes part 2] there were not many!)

Which leads to first Flukes lesson for anyone wanting to create professional level scientific Palaeo-Art:

Rule #1 of Scientific Restorations: Don't ever recreate any organism simply from memory. Even if you think you know it well!

An obvious point when you think about it, but it is a very important one I've been learning over and over this year! I'm sure many of our more experienced artist readers are saying "duh!", but you need to start with the basic rules before you can worry about the more complicated ones (which I will get to in later articles). That and, I have found even with things I personally know well, I can still never find enough reference pictures and photographs to work off!

Sadly in December of 2008 I had not yet learned this lesson (or any of the others to be covered in Flukes). So we start here on an accidental journey through my development as an artist throughout the year of 2009. This year has seen my skills and capabilities grow at a rate I never would have imagined. A great deal of this is thanks to the challenge of ART Evolved's galleries, and the support and input of our many readers and visitors (a big thank you to you all!).

I hope as you read Flukes and look at my art you'll see the same transformation in my work that I have. More to the point, though this particular post's included artwork will no doubt hurt my credibility as an "expert", as we go installment to installment, hopefully you'll see how the lessons in each Flukes add up to drastically improve my art to the current form that Dr. Fordyce has given tentative approval too!

So with that in mind, perhaps shooting myself in the foot as an authority, I give you my work from 10 months ago (and 3 month pre-ART Evolved forming)... 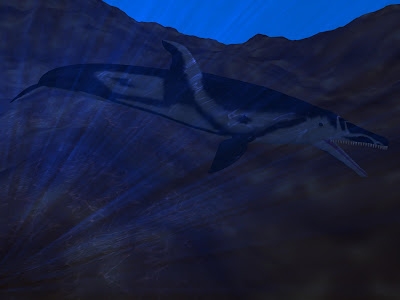 This was the first take. Though I didn't reference any fossil material, I did model the odd thing after my favourite extent Dolphin species the Pacific White Sided Dolphin (otherwise known as a Lagenorhynchus obliquidens). So things like the colorization and the dorsal fin were based on "something". However when I actually did my research it would turn out this was among my worst options for a living Dolphin to go off... 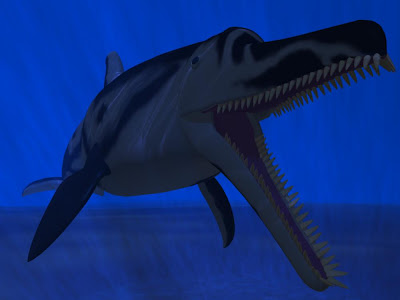 Here is a close up on the jaws and the teeth. Even at the time I knew they were the weakness of this creation. I had tried to make the body, tail, and fins impressive enough to show what I was capable of. Yet it is the head and its details that make or break any restoration! 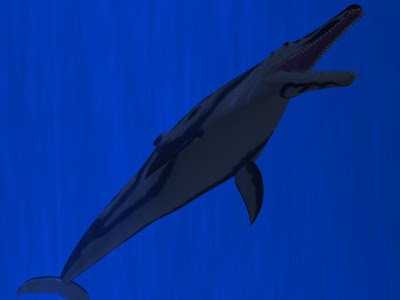 For a off the cusp conjuring of a shark toothed dolphin I guess it isn't as bad as you could get. It is painful to look at now, and I wish I'd never shown them to Dr. Fordyce. I created them off of nothing more then what I could remember of some skulls on display at museums around NZ, but whales had never been my primary focus when looking...

I got next to nothing right in these prototype versions. Well okay, other then the tail flukes, which Dr. Fordyce has never once asked to be changed, making them accidental flukes! A big inspiration behind the articles title.

As we'll see in part 2, I paid for this foolish charge in blind strategy. However do not think too cruelly of me please. I'd never worked with anyone on my palaeo-art before, that alone a real scientist. There also aren't that many good easy to access visual references on shark toothed dolphins out there either.

Topping this all off, I hadn't yet consulted Dr. Fordyce on my intention to recreate the whale, so I had no idea which genus of Dolphin he might want me to do. I rendered the above restoration going off my fleeting recollection of several random skulls I'd seen here and there. Though they share the same general make up, they surprisingly differ on the fine details (as all animals do on the genus and species level).

Here were the three shark toothed dolphins that were kicking around in my head. I at the time didn't really have any good photos of any of them, and had no idea which would be Dr. Fordyce's priority.

So I'll end part 1 of Flukes with a guess gaming. Which one of these three skulls would Dr. Fordyce wish to be restored when I finally approached him?

The only hint I'll give you, is that my article's banner may not be as helpful as you think! There are bonus points to anyone who can roughly identify these skulls. Only one has been formally named and described, but a rough comparison to other well known Squalodontoidea will count. 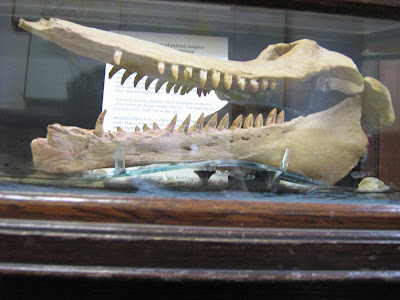 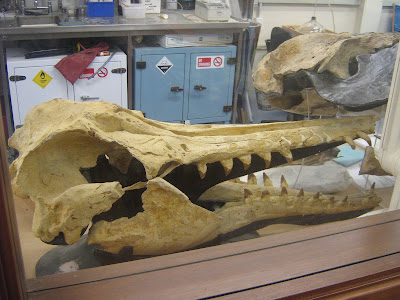 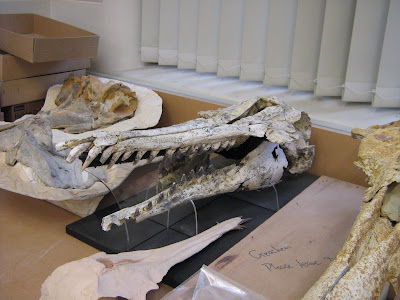 Stay tuned for Part 2, telling the story of my showing these embarrassing first versions of the Dolphin to Dr. Fordyce and through the aftermath learn yet another key lesson in proper scientific restoration!

As a final note, if you were wondering how many parts this series will be, I can not at moment tell you. There are 4 more parts I can do at moment, but my efforts on this project are not yet complete. The dolphin has not been finished to Dr. Fordyce's final specifications, and so I have no idea what the outcome of it all will be!

So I invite you to join me in creative suspense... Can my art meet the final approval of a real palaeontologist? Will my dolphin ever see publication in print or on display someday?

Obviously I have no answers for you now, but hopefully I will in the future...
Posted by Weapon of Mass Imagination at 12:35 PM