Dinosaur feather colours may not be as easy to determine

(Thanks to Diagenesis for the heads up, also check out Ed Young's post on it here)

A new study by Maria McNamara of the University of Bristol calls into question some (emphasis some) of the recent claims about feather colour in fossil Dinosaurs.

Doing studies on the effects of heat and pressure on the molecular composition of pigments in modern bird feathers, Dr. McNamara found that these molecules changed even under just these limited conditions reproducible in the lab. Meaning that given millions of years with similar long term conditions pigments could radically change.

With that said the original author of the feather fossil study Dr. Jakob Vinther has come out with a rebuttal stating his team had noted such possible changes.

Only time and more studies into both feather pigments and the processes by which they fossilize will tell us if we have truly unlocked the colour scheme of some Dinosaurs.

So some flexibility (and less certainty) has crept back into feather reconstructions there artists.
Posted by traumador at 7:27 AM 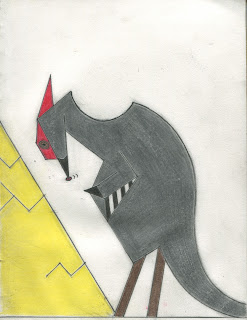 As you may have noticed, LITC's "All Yesterdays Contest Gallery" ( http://chasmosaurs.blogspot.com/2013/04/all-yesterdays-contest-gallery.html ) includes my entry. I originally wasn't gonna enter any of the All Yesterdays contests given 1) my unrealistic style, & 2) my lack of artistic skill w/scientific accuracy. I generally avoid drawing real animals (especially those blameless, holy creatures known as dinos ;) ) for the same reasons as I just don't feel worthy. However, I was then reminded of LITC's contest rules. When that was combined w/the urge to put my ideas on paper, I decided to make an exception.

Now, for the entry itself. Of the 2 forms of anting (See the Editor quote), I figured the former was more likely given the facts that 1) alvazersaurids had long necks & short arms, & 2) alvazersaurids were probably seeking out ants for food, anyway. The alvazersaurid is generic, based loosely on Linhenykus ( http://www.desksketch.com/2012/07/24/it-is-a-linhenykus/ ), which lived in the Gobi region during the Late Cretaceous. The color scheme of the alvazersaurid is based loosely on a combination of the Northern Flicker (an insect-eater like Linhenykus) & the Scaled Quail (a ground-runner like Linhenykus), both of which live in the Nebraska Sand Hills & are known to ant (See the Viegas quote for why the Nebraska Sand Hills).


Quoting Editor ( http://www.birds.com/blog/anting-behavior-in-birds/ ): "Anting can take on different forms. Some birds will pick up ants in their beaks and rub the ant over their feathers, after which they eat the ant; while others will open their wings and lie down over an active anthill and allow ants to climb up onto them. But it does seem that one part of anting remains consistent: birds prefer using ants that produce formic acid. Ants use the formic acid their bodies produce as a defense mechanism, which they spray at their attackers, but at the same time provides birds with a certain something that scientists would love to discover."

Quoting Viegas ( http://naturalselectionsinscience.blogspot.com/2009/12/screaming-roadrunner-ran-circles-around.html ): "The presence of so much diverse wildlife in the Gobi region during the Late Cretaceous, along with geological studies, suggests that this area was once similar to the Channel Country of central Australia or to the Nebraska Sand Hills."

Email ThisBlogThis!Share to TwitterShare to FacebookShare to Pinterest
Labels: Reviews

My 2nd Pair of Reviews

As an Art Evolved member, I post a pair of my reviews here every so often, the 1st being positive & the 2nd being negative. I'd greatly appreciate you reading & voting "Yes" for said reviews in the bolded links below. Besides wanting to make sure said reviews give a good idea of what to expect, they need all the "Yes" votes they can get because 1) the 1st is for a great book that deserves more attention, & 2) the 2nd is outnumbered by opposing reviews (which don't give a good idea of what to expect). Many thanks in advance.

P.S. For my previous reviews, see "My 1st Pair of Reviews": http://blogevolved.blogspot.com/2013/03/my-1st-pair-of-reviews.html

Short version: If you must have a dino Q&A book, get Norell et al.'s "Discovering Dinosaurs: Evolution, Extinction, and the Lessons of Prehistory, Expanded and Updated" (I.e. Evolution). It's as good as dino Q&A books get.

I generally dislike the dino Q&A genre for 3 main reasons: 1) Redundant questions; 2) Vague answers; 3) Bad Q&As (I.e. Stupid or misleading questions & misleading or wrong answers). Evolution is the ultimate exception to said genre because it does the exact opposite of all that & MUCH more:
-Precise questions? Check! It helps that Evolution focuses on quality over quantity (unlike my next review's book, which features "more than 600 questions about dinosaurs").
-Concise answers? Check! Again, it helps that Evolution focuses on quality over quantity (E.g. Evolution does in 1 Q&A & 4 pages what takes my next review's book 26 Q&As & 15 pages to do).*
-Good Q&As? Check times infinity! As far as I know, they were accurate at the time of publication, & are still mostly accurate now.** It helps that Norell et al. are the curators of the American Museum of Natural History's (I.e. AMNH's) "Hall of Dinosaurs" & thus know what they're doing (unlike the authors of my next review's book, who are neither experts nor even collaborators with experts). & if that's not good enough, Evolution is basically 2 books in 1, the 1st section listing the Q&As & the 2nd/3rd/4th section describing the dinos on exhibit in the AMNH's "Hall of Dinosaurs"/the AMNH's dino discoveries from the 1990s/the AMNH's dino expeditions from 1897-2000, respectively.

If I could, I'd give Evolution a 4.5/5. My only gripes are the lack of life reconstructions (The photos & drawings of fossils are great, but I like it best when a dino book is also illustrated with life reconstructions based on said fossils) & the sit-on-the-fence attitude of Norell et al. when it comes to controversial topics (1st, see the Mallison quote for why that annoys me; Then, compare the Norell et al. quote to the GSPaul quote).*** However, for the purposes of this review, I'll round up to 5/5.

***I picked the GSPaul quote because 1) like Evolution  it's from 2000, & 2) to quote John Kwok, it's from "a splendid summary of the current state of knowledge of dinosaurian paleobiology."


Quoting Mallison ( http://dinosaurpalaeo.wordpress.com/2012/05/17/review-of-brusatte-2012-dinosaur-paleobiology/ ): "With regards to physiology and in the final chapter on extinction Steve manages to present the highly controversial topics well, the evidence provided by all sides (as opposed to the BADNits with their lack of evidence; they get ignored), then finally sticks his neck out by hanging his hat on an option. Dinosaurs were, Steve concludes, what I term "functional endotherms", whatever the details and tiny differences from birds and mammals, and were killed off either directly and indirectly by the asteroid hit, or with ample help from it.I applaud Steve's decision to not sit on the fence out of a misguided sense of having to report evenly or some such nonsense. The evidence is clearly not evenly supportive of hypotheses, and Steve does a very good job of showing why that is the case. For a scientist that may not be necessary, but many laypeople will read this book, too."

Quoting Norell et al.: "Were nonavian dinosaurs warm-blooded? The evidence is still equivocal, and most claims that all dinosaurs are "warm-blooded" are speculative. There is no clear-cut evidence that dinosaurs were either cold-blooded or warmblooded, except that dinosaurs evolved endothermy sometime in their history, as documented by living birds."

Quoting GSPaul (See "The Scientific American Book of Dinosaurs"): "Reese Barrick has been involved in leading-edge research that could have only been dreamed of in the 1970s, using bone isotope ratios to more directly measure the thermodynamics of dinosaurs. His essay combines this chemical analysis with other lines of evidence to conclude, as have most other researchers, that Bakker was correct: dinosaurs did not have reptilian energetics, and they consumed and burned oxygen at rates far higher than seen in modern reptiles."

Short version: If you must have a dino Q&A book, get Norell et al.'s "Discovering Dinosaurs: Evolution, Extinction, and the Lessons of Prehistory, Expanded and Updated". The only thing Barnes-Svarney/Svarney's "The Handy Dinosaur Answer Book" (I.e. Answer) is consistently "handy" for is showing how bad dino Q&A books can get.

I generally dislike the dino Q&A genre for 3 main reasons: 1) Redundant questions; 2) Vague answers; 3) Bad Q&As (I.e. Stupid or misleading questions & misleading or wrong answers). In my previous review, I referred to Norell et al.'s "Discovering Dinosaurs: Evolution, Extinction, and the Lessons of Prehistory, Expanded and Updated" as the ultimate exception to said genre. This review is about Answer, the ultimate epitome of said genre. Before I look at Answer's content, though, I want to briefly look at its paleoart (which is an important part of any popular dino book).

The cover art is a poorly-photoshopped stock photo of inaccurate, cheap-looking CG theropods running around roaring for no apparent reason. I can't even tell what kind of theropods they're supposed to be: On the 1 hand, they have very allosaur-esque heads; On the other hand, they have very ceratosaur-esque arms. The interior art is more of the same as well as stock photos of outdated dino models (E.g. Tail-dragging, swamp-dwelling sauropods & scaly-skinned, bunny-handed dromaeosaurs).

Remember what I said about Answer & the dino Q&A genre earlier? Answer is the ultimate epitome because it does all that & MUCH more:
-Redundant questions? Check (E.g. 7 out of 62 Chapter 9 questions ask, "What...survived the extinction at/did not survive the extinction at/did not disappear at/went extinct at/lived at/survived past the end of the Cretaceous period?")!*
-Vague answers? Check (E.g. See the 1st Barnes-Svarney/Svarney quote; Notice that it doesn't explain what it means by "certain modern reptiles" nor how they & birds are related to dinos nor how we know what we know)!
-Bad Q&As? Check times infinity! The 2nd Barnes-Svarney/Svarney quote is the worst because it fails on many levels: It promotes debunked fringe ideas (The 2nd camp's belief); It fails to understand how evolution works (If birds descended from dinos, then they ARE dinos, & thus the 1st & 3rd camps are the same); It fails to understand how much evidence the 1st/3rd camp has ("There are not enough fossils to come to a definite conclusion"); It fails to understand how bad the 2nd camp's arguments are ("All sides have good arguments"); It contradicts itself from a previous Q&A (See the 3rd Barnes-Svarney/Svarney quote; If paleontologists have "good arguments", that implies that they have "acceptable fossil evidence to support" their arguments). & if that's not bad enough, Answer repeats said fails as well as misspells animal names throughout (E.g. In Chapter 9 alone, Dilophosaurus/Rahonavis/P.robusta/dinosaurs/coelurosaurs are misspelled as Dilaphosaurus/Rahona/P.robust/dinosuars/coelurasaurs, respectively).

*Chapter 9 in Answer is "DINOSAUR CONNECTIONS".

Quoting Barnes-Svarney & Svarney: "What are the major camps in the dinosaur-bird evolution debate?
There are several camps of paleontologists in the dinosaur-bird evolution debate. One group believes birds descended from certain dinosaurs about 60 million years ago. Another camp believes proto-birds evolved separately from dinosaurs about 200 million years ago. And there is another group that has emerged: scientists who believe that birds are actually dinosaurs. Right now, there are not enough fossils to come to a definite conclusion, and all sides have good arguments. However, with the advent of DNA sequencing, scientists may one day have the answer."