For anyone paying attention (and I don't expect that to be many of you ;) ) I've been threatening a palaeoart project for quite sometime. The project kept dying in its tracks partially due to paying (board game) gigs, but also my over ambition.

I'd kept dreaming of doing animations for Youtube, but of course animation is very time consuming and hard. So I'd be overwhelmed fairly quickly.

However it has recently occurred to me why do I need animation for little sci videoes? Why not just do a series of storyboard style illustrations with narration?

So thus my big break through!

Here is a sample of what I'm up to now. Let me know what you think of the style. 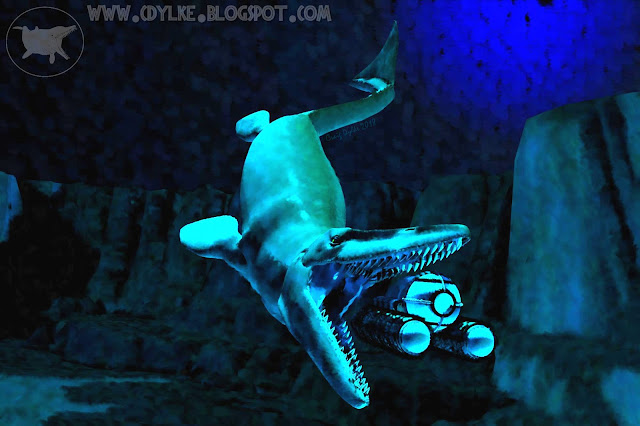 I assure you this is not pure fan art. I'm planning on tearing this scene from the recent motion picture apart scientifically in a quick little kid friendly video.

Again I'm the guy who put together this Mosasaur Jurassic World size chart back in the day... 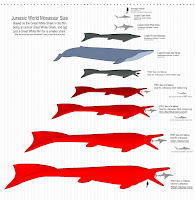 Posted by traumador at 6:36 AM

My 24th Pair of Reviews

As an Art Evolved member, I post a pair of my reviews here every so often, the 1st being positive & the 2nd being negative. I'd greatly appreciate you reading & voting "Helpful" for said reviews in the bolded links below. Besides wanting to make sure said reviews give a good idea of what to expect, they need all the "Helpful" votes they can get because 1) the 1st is for a very good book that deserves more attention, & 2) the 2nd is outnumbered by opposing reviews (which don't give a good idea of what to expect). Many thanks in advance.

As far as I know, there are 5 editions of "Dinosaur (DK Eyewitness Books)" (henceforth DD 1989/2004/2008/2010/2014). As much as I love DD, it was never truly great: For 1, see the Ben quote; What Ben says about "the AMNH fossil halls" goes for DD; For another, DD is a mixed bag in terms of paleoart.* If you want the current best DD-style book, get Abramson et al.'s "Inside Dinosaurs". If I were to recommend reading an edition of DD in conjunction with other, more recent books (E.g. Holtz's "Dinosaurs"), it'd be DD 2004. In this review, I list the 2 main reasons why that is.

1) In reference to "For 1" (which mainly refers to DD 1989), DD 2004 partially solves this problem with "8 pages of new text", all of which are "distinctly color-coded". This is especially apparent in the "Find out more" & Glossary sections: The former lists some of the best dino museums in the U.S. & their websites (which is good because [1] it makes DD interactive, & [2] to quote Norman/Milner, "You can also take a virtual tour of many museums over the internet if you cannot visit them in person"); The latter clearly explains all technical terms. DD 2008 is almost exactly the same in content, the problem being that much of what was accurate in 2004 was inaccurate in 2008 (E.g. The records for "biggest dinosaur", "biggest meat-eater", & "shortest dinosaur name"). DD 2010/2014 have the opposite problem as DD 1989. While DD 1989 is too esoteric, DD 2010/2014 are too simple & condescending (E.g. "Hadrosaur" is defined 10 times throughout DD 2010, including twice on page 70). & if that's not bad enough, DD 2010/2014 are even more inaccurate for their time (probably because they're authored by a non-expert) & exclude said websites.

2) In reference to "For another", DD 2004 partially solves this problem with "stunning real-life photographs of dinosaur bones, skulls, teeth and more". This is especially apparent in the "and more" photos: Many of DD 1989's not-so-good life reconstructions, most of which were outdated even in 1989, were replaced in DD 2004 (E.g. Hill & Winterbotham's tail-dragging Mamenchisaurus & Diplodocus, respectively, were replaced by a herd of Graham High's Brachiosaurus); Many of those that weren't replaced got new captions (E.g. The new caption for Graham High's Deinonychus reads, "Most scientists now agree that, unlike the model shown here, Deinonychus was probably feathered"). Pixel-shack's bad life reconstructions started to replace DD's good ones in 2008 & almost completely took over in 2010/2014. Pixel-shack's "DK 2003" Velociraptor ( https://i037.radikal.ru/0805/62/0f35f1cca590.jpg ) replacing the AMNH's "Fighting Dinos" Velociraptor ( http://65.media.tumblr.com/tumblr_lru07qBMv11qio57co1_1280.jpg ) is an especially good example of that.

*I'm specifically referring to DD's life reconstructions, many of which are not-so-good (I.e. Those by various illustrators & Pixel-shack in the older & newer editions, respectively).

Quoting Ben ( https://extinctmonsters.net/2015/02/26/framing-fossil-exhibits-phylogeny/ ): "Within the actual fossil halls, interpretation remains stubbornly unapproachable. For example, the sign introducing proboscidians tells visitors that this group is defined primarily by eye sockets located near the snout. An observant visitor might wonder why scientists rely on such an obscure detail, as opposed to the obvious trunks and tusks. There’s a good teaching moment there concerning why some characteristics might face more selection pressure (and thus change more radically) than others, but instead visitors are only offered esoteric statements. Relatedly, the exhibit does little to prioritize information. Most label text is quite small, and there’s a lot of it. Compare this to Evolving Planet at the Field Museum, where there is a clear hierarchy of headings and sub-headings. Visitors can read the main point of a display without even stopping, and parents can quickly find relevant information to answer their charges’ questions (rather than making something up).
Evolving Planet also compares favorably to the AMNH fossil halls in its informative aesthetics and spatial logic. At FMNH, walls and signs in each section are distinctly color-coded, making transitions obvious and intuitive. Likewise, consistent iconography...such as the mass extinction zones...helps visitors match recurring themes and topics throughout the exhibit. AMNH, in contrast, has a uniform glass and white-walled Apple Store aesthetic. It’s visually appealing, but doesn’t do much to help visitors navigate the space in a meaningful way."

In my experience, when a non-fiction dino book is given a superlative title, it's being set up for failure. As far as I know, only 1 such book lives up to its title & Maynard's "The Best Book of Dinosaurs" (henceforth BB) is definitely NOT it or even just decent in its own right.* In this review, I list the 3 main reasons why I think that is.

1) BB's life reconstructions are mostly not-so-good. Those by Kirk are as good as it gets in BB, while those by Forsey are as bad as it gets: In reference to Kirk, the ornithischians & Barosaurus are depicted with too many claws; Otherwise, the dinos are mostly accurate for the time & completely awesome for all time (E.g. See the Deinonychus on the back cover, which have tiger stripes & a lightning storm background); In reference to Forsey, I've already said everything I have to say about him in my Wonder review (I.e. "Wonder's more realistic reconstructions": https://www.amazon.com/review/RGU1QQZ5DR8A5/ref=pe_1098610_137716200_cm_rv_eml_rv0_rv ); Unfortunately, most of BB's life reconstructions are by Forsey. Those by Field fall somewhere in between, but more towards Forsey (E.g. See the Triceratops on the front cover, which have cartoonishly angry eyes & 4 clawed fingers per hand).

2) BB is a confusing mess in terms of organization. There isn't even an Introduction. BB just begins with a chapter about baby dinos & continues with no logical transitions or flow between the chapters.

3) BB fails to cover many dino-related subjects & those that are covered are done so in an insufficient manner:** Sometimes, it simplifies things to the point of being meaningless; This is especially apparent in the chapter about the dino extinction because 1) the main text explains nothing about the science behind the dino extinction story, & 2) the sidebar text needlessly re-tells said story; Other times, it's just plain wrong; This is especially apparent in said chapter because it's claimed that 1) the asteroid "hit Earth in Central America" (Last I checked, Mexico =/= Central America), & 2) only "some scientists think that dinosaurs were the ancestors of modern birds" (Quoting Witmer from a 1995 book: "There are so many derived similarities between birds and these Deinonychus-like theropod dinosaurs that most paleontologists today believe birds are theropod dinosaurs!").

*By "1 such book", I mean Holtz's "Dinosaurs: The Most Complete, Up-to-Date Encyclopedia for Dinosaur Lovers of All Ages" ("Dinosaurs" for short).

**By "many", I mean half of all the dino-related subjects a decent introduction to dinos would cover. Using Gardom/Milner's "The Natural History Museum Book of Dinosaurs" as a guide, BB fails to cover "The dinosaur world", "Getting about", "Living animals", "Dinosaurs and people", & "Dinosaurs and birds".
Posted by Hadiaz at 12:15 AM