Your chance to help determine the timetable

Based on the comments, and implied commentary, we are officially reconsidering our galleries scheduling.

We only had 2 official comments, and they both suggested a reschedule. We also take the lack of overall commenting as implied evidence that this is a bad time of year for everyone, and as of such we want to reconsider the timing of our galleries due to this to. Finally in private discussions between the administration, it has also come up we have all been thinking about changing the time table independently.

As the Time Capsule galleries are our longest standing tradition and the biggest community feature on AE, we are giving all of you out there the final say on what our new timetable will look like.

On the right sidebar is a VERY important poll. Please vote you have or are interested in ever participating in one of our galleries! 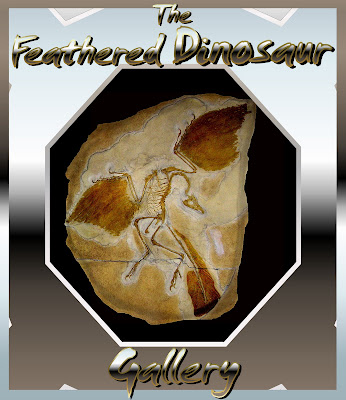 Once the votes are in, our planned "reboot" gallery will be the Feathered Dinosaur gallery!

This is sure to be a popular topic and we hope it draws mass attention to our new schedule (if one is voted upon). As of such the we are giving everyone some lead in time before launching this gallery... As it stands right now we will be launching Feathered Dinosaurs early in the new year... UNLESS we get more than 15 comments/commitments of art from artists eager to launch this sooner.

We will announce the Feathered Dinosaur gallery date once the vote for the new schedule ends next week.

If you have completed or plan to complete a piece for our (defaulted) Forest gallery, we will still happily post them with all the fanfare they deserve (they just might not get a large gallery is all).

So please let us know what your preferred schedule for creating paleao-art is, and we'll try to accommodate...
Posted by traumador at 2:44 AM

In theory the Forest Gallery is supposed to go up in 2ish weeks, and yet we haven't formally talked about at all... Oops

I sincerely apologize to any people really excited about this potential theme. I didn't mean to kill this gallery with neglect. Hopefully my excuse of moving to Hong Kong at the start of September (with 4 days notice) and jumping into a full time teaching position the day after arriving is sufficient excuse (Peter Bond has an equally valid excuse of acquiring his own full time teaching gig a week later!).

These delays may sadly be the new status quo on ART Evolved. We have been trying to juggle this site with our new heavy duty work loads, but sadly the work takes priority.

Now I don't bring this up to say ART Evolved is finished (far from it). Nor are we planning to pack in the galleries anytime soon.

I just see this as a great chance to discuss people's thoughts on how we've been running the galleries the past 3 years, and whether we wanted to shift the timing or frequency of them. (I note for example at least two of our previous November galleries had severe delays and schedule disruptions).

In the immediate future we have two options. One we could carry on with a forest themed gallery, and simply push the due date to later. OR we could drop it, and go for the special end of year gallery Bond and myself came up with in the spring (your only hint is Dinosaurs and feathers... :P)
Posted by traumador at 9:09 PM

By now I'm sure you've heard about the supposed Triassic Kraken, eater of whale sized Ichthyosaurs, and self aware artist using the marine reptile bones as its medium. If you haven't it was just presented at a conference last week.

While this would have been an amazing find, it sadly just sounds stupid based on the evidence (I heard was) presented. It was claimed that due to strange arrangements of many whale sized Ichthyosaur vertebrae, a giant squid was using the bones to compose a self portrait of itself. A basic examination of taphonomy and/or comparisons with modern sunken whales provides plenty of legitmiate ways for an Ichthyosaur to end up a in funny resting position. Read Brian Switek's review of it all for more detail.

Yet if if the squid was found to exist and it did indeed create such self portrait art (I am NOT advocating or supporting this claim though, to be clear!!!) this brings up a very interesting philosophic point for us palaeo-artists...

This post and the philosophic idea it presents were inspired and triggered by this great doddle by Nobu Tamura.

If there were a prehistoric creature that had created its own artistic reconstruction of itself or its world, that would have a significant impact on our own modern palaeontologic artistic efforts. It could call into question what is palaeo-art, and whether we are accomplishing our mission properly!

The mission of any (worthwhile) palaeo-art is to somehow capture the prehistoric world, and bring (part of) its essence up through the well of deep-time. Up until now we have only known humans to engage in this activity. Thus all of us humans have all been on an even playing field, we are all removed from our subject matters by millions of years...

Our art recreates these worlds through indirect and comparative observations. None of our art can claim to be directly influenced by the things it is trying to represent.

Yet if there were a prehistoric organism that had itself engaged in artistic recreations of anything directly from its time, that would render our efforts completely mute conceptually. Yes the squid's (or whatever's) art is not true palaeo-art, but rather contemporary art of its own prehistoric time. However that is the point. It is not pretending to emulate prehistory, it actually depicts prehistory!

To me, philosophically, this is a fascinating potential challenge to our palaeo-art. Not that it would stop me from creating it, or talking about it pretentiously like this :P I just think the concept of something back in deep time actually recording its world fascinating and somehow appealing...

Not that I think we've found it yet!

(Hat tip to the Palaeontography people I've been debating with in private emails for getting me to think about the old definition of "palaeo-art", which in the 1800's referred to art created by prehistoric humans. This definition of palaeo-art is the reason for their desire to push for Palaeontography as the new name for what this site acknowledges as palaeo-art.

A very interesting discussion, but I stand by the Dinosaur related art definition of Palaeo-art, given it has an accepted non-formal definition within palaeontology, and the cave painting meaning hasn't been used in ages. Wikipedia only has an article on dino-art as proof our definition of palaeo-art is the only one commonly accepted these days...

I'd be more inclined to accept Palaeontography, if there were a giant squid creating art in the Triassic! That would be real palaeo-art :P)

Posted by traumador at 8:36 PM

A very cute ad all over the place here in Hong Kong for the public transit system (MTR). 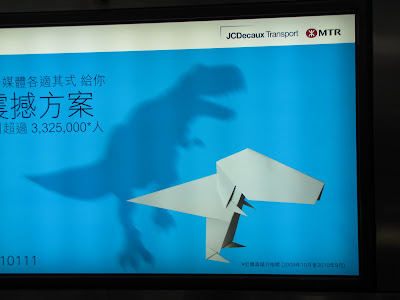 I really like it. Not that I could tell you what it says or is trying advertise mind you.

In unrelated news I'm about to put up a ton of posts about the random adventures of my first month in Hong Kong. So if you're not interested in this blatant self promotion, tune out now. If you are interested check them out at my blog Weapon of Mass Imagination. Sadly no Dinosaurs or palaeo-art, but lots of crazy unexpected things.

Posted by Weapon of Mass Imagination at 1:01 AM

Tyrannosaurus rex and Albertosaurus sarcophagus both celebrate their 106th birthday today! Wish them both a happy birthday! 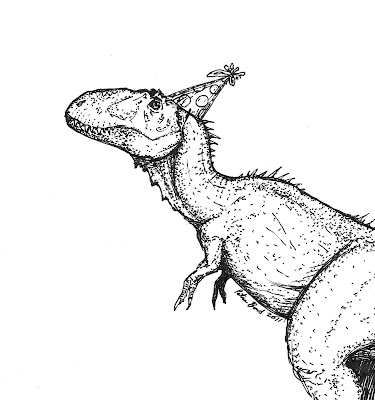 Download the original 1905 Osborn paper here. (Thanks to Thomas Holtz on facebook for providing the link today!)
Posted by Peter Bond at 12:03 AM

For decades, the dinosaur toys was source of great profits for who sell them, because they are the first dinosaurs with the kids can interact. But... who design this models?

In general, every kind of toys born from a sketch, an idea conceived from a designer. When the toy refers to a movie or a cartoon, the designer have the justification to project a product very similar to the movie/cartoon carachter.
For example, in the 90's the designers of Kenner toys had complete creativity freedom to design the Jurassic Park toys basing their work on the dinosaurs of the movie. Kenner had the license for that.

But... we are sure that everyone else do the same?

The first series of Papo dinosaurs, for example, are fully insipired by the dinosaurs of all the three JP movies. They are very cool and the value for money is very convenient. Even, they are more similar than the original Jurassic Park toys, from Kenner and Hasbro.

But Papo doesn't have the Universal license, so their toys doesn't report the brand of Jurassic Park...

The first Papo toys, insipired to the dinosaurs of Jurassic Park movies.
But what about paleoartists influence on the dinosaur toys industry?
Looking at many images of dinosaur toys, i realized they are copied from a lot of popular (and not) paleontological illustrations.
I assembled a few pictures to show you what mean:

Allosaurus by Brett Booth (image from demonpuppy.blogspot.com) and Papo Allosaurus.

Ampelosaurus by Dmitry Bogdanov and CollectA Ampelosaurus (image from The Dinosaur toy Blog).

Oviraptor by Luis V. Rey (from Rey's website) and Oviraptor by Safari LTD.
These are just some examples, there are many others.
Now, from what i know, no one of these artists was been contacted before the production of the relative model. Maybe, this toys companies think that is sufficient modify some detail (like the colors, or the pose of a single arm) to make the model "original". This have a negative impact to the work of the paleoartist, because their illustrations do an unpaid job.

What you think about that?
Maybe is the moment to create real work possibilities between the paleoartists and the modeling companies and to say stop to these "stolen reconstructions".
Posted by Sante Mazzei at 4:21 AM