The most obvious and fascinating thing about the Sauropods was of course their necks. Some them had unfathomably long necks, and with nothing alive today with anywhere near this sort of configuration (at least anywhere near their size) it leaves us asking a lot of questions about them.

This year has seen a great deal of debate about how Sauropods held their necks. Computer modelling has suggested that these giant Dinosaurs could not raise them much above parallel to the ground, but now research by the SVP-OW gang on living animal skeletons suggests this was not the case.

With this issue on our minds, I bring you to my big question about Sauropods. How thick would the soft tissue around their necks have been to hold up such large structures?

Aesthetically I've personally always preferred the super slender neck look, such as this by Gregory Paul.

However today I modelled such proportions in 3D. The results didn't look so convincing. In fact to be honest it looked like the whole neck should have just snapped off and fallen to the ground.

I love this look for Brachiosaurus, but is this slim neck only believable due to some sort of visual trick caused by it being rendered in 2D? 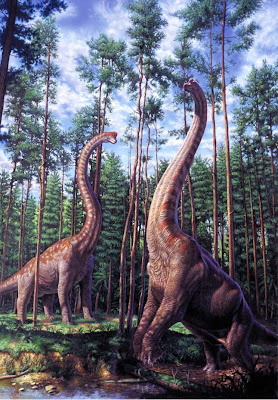 A beefier slim such as this by Mark Hallett is the thinnest I can think of for a 3D model. The Jurassic Park Brachiosaur had similar proportions to these guys.

Or was that still too slim? 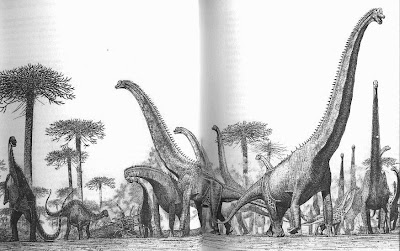 In a later rendering by Gregory Paul, he drew a bulkier and more massive neck. It is a drastic departure from his earlier attempt. I can personally see where he is coming from imagining this as a living animal, and not a picture on a piece of paper. Yet it is a drastically different feeling animal and piece.

Some like John Conway have taken this bulking up to Arnold-like proportions.

Artistically we have many choices on how to reconstruct a Sauropod. The question is which of these is artistic liscense, and which is based on the once living animal?

Which of these do you think looks closest to what a living sauropod would have had? Do you know of any research that points to an answer? Or is it like the neck posture itself, and still surrounded by controversy?

Leave your comments below...

Posted by Weapon of Mass Imagination at 2:26 AM