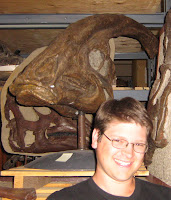 What does correct palaeoart look like? Is it Sir Charles Knight's pencils or Luis V. Rey's colourful paint? How can you capture what an animal nobody has ever seen before looks like?

This is the basic problem that artists face when reconstructing extinct animals and plants. Interpreting skeletal material, skin impressions, and footprints, they try to create life! This is not an easy job. Mistakes are made, evidence is reinterpreted, ideas and theories change. As ideas change, so must palaeoart.

For example, I have searched the net for photos of another well known dinosaur: Edmontosaurus regalis. 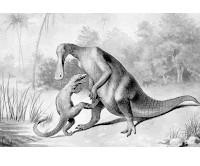 Skull length, neck length, arm length and positioning, muscle thickness and placement, feet and hand differences, even body pose... This variety in anatomy mixed with the subjective colour and texture amounts to a series of pictures that look like different animals.

Is one reconstruction better than others? What does "better" mean? If we equate "better" with "more accurate," then yes, some are more accurate than others. Accuracy comes with time, new discoveries and new ideas. Is the goal of a palaeoartist to be as accurate as possible?

What are the goals of a palaeoartist? Leave your comments below!