Welcome to the first ever ART Evolved Palaeo Art Roundup!

In these roundups we aim to highlight and gather as many of the various Palaeo-Art related posts and stories that pop up on the web as we can find! We'll be bringing you this feature every couple of weeks, and would love your suggestions for future editions.

If you see something cool and related to Palaeo Art be sure to fire it our way! Please include the web address at minimum, but if you want to write the caption or include a sample piece of art it'd make our lives easier ;p The email address is of course artevolved@gmail.com

So for this first week here are:

Brian over at Laelaps covers the tale of the sail backed Synapids (the theme for the next Time Capsule Art Gallery!) including the story of Charles Knight's first incorrect restoration of one.

Dr. Naish of the legendary Tetrapod Zoology examines in fine detail the Palaeo-Art proposed idea of trunked Saurpods, and pictures such as this one created by John Sibbick. Definately worth a read before drawing a long necked Dinosaur! 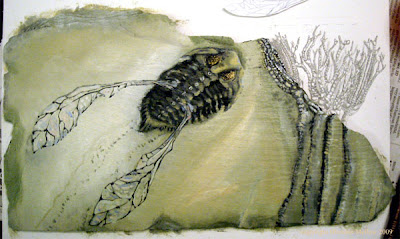 Glendon the Flying Trilobite, in this week's edition of his usual Artwork Mondays feature, takes us through his creating a new exciting Trilobite and Crinoid inspired banner for his blog.

This week saw the announcement of the earth shaking Tianyulong confuciusi, an ornithischian with feather like structures! You can catch the news of this here and there. A taken forgranted feature of this story is the amazing artwork of Li-Da Xing, which has accompanied nearly everyone's posts about it. The picture is great at bringing this animal spectacularly to life in the mind's eye. Ville of Dots In Deep Time has done a great skeletal reconstruction of this Dinosaur that is most definately worth checking out!

ETrilobite in this week's installement of Walcott's Quarry has a rather humourous encounter between Walcott and Gould the Wiwaxia.

Zach of When Pigs Fly Returns brings us an exciting and interesting illustration project surrounding possible speculative evolution of Dicynodonts. Dr. Ryan of the infamous Palaeoblog highlights an old DC comic and the Dinosaurs and Prehistoric critters who menaced its heroes. This picture was penciled by Ross Andru and inked by Mike Esposito. Speaking of comics watch ART Evolved for a preview of Marvel Comic's upcoming Dinosaur themed special!

Scott over at the Coherent Lighthouse takes us through his artisitic process on his Pachyrhinosaur.

Gombessa Girl while checking out one of her favourite artists found some rather cute Mosasaur inspired sculptures.

We also recently saw the announcment of a new super powerful biting Pliosaur called "Predator X" (for now). Some great 3D art by Atlantis Productions have been accompanying the news posts. 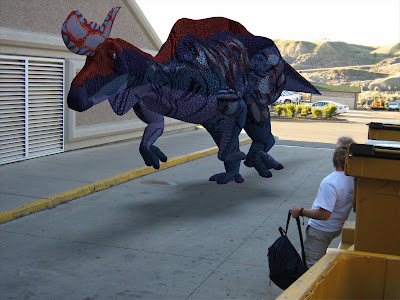 Finally, Craig the Weapon of Mass Imagination has recently been retooling some of his 3D Dinosaurs for use in Traumador the Tyrannosaur's adventures.
Posted by Prehistoric Insanity at 6:07 PM