Hello fellow palaeo-art lovers, I’m Mo Hassan. The “Mo” is short for Muhammed, by the way. This is me with my favourite fossil ever, the Acadoparadoxides trilobites. 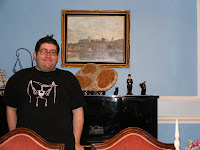 I’ve been a lifelong lover of animals and have been drawing them for twice as long. Since a very early age I could be seen with pens and paper and wildlife books, especially dinosaur ones. The precocious interest in the natural world, both as it is now, and how it once was, ultimately led me to my current choice of career.

I spend a lot of time at the world-famous Natural History Museum in London, where I work and study. My aim is to start a Ph.D. programme in vertebrate palaeontology in the next few years, and then ultimately be a researcher and theoretical palaeontologist. I love to impart knowledge, which is part of the reason why I started and have maintained The Disillusioned Taxonomist, so lecturing for me would not be out of the question, as part of my job. Incidentally, I chose the name for my blog due to the fact that I have always been interested in scientific names since I first heard about them in early childhood, so I naturally chose to study taxonomy. I then realised, whilst doing my Masters, that the world of taxonomy was changing, the role that DNA and other molecules play in the science of naming organisms has taken over from the classic descriptions of organisms from physical specimens; this is what has disillusioned me. This is the main reason for me to want to focus on palaeontology.

Here are some examples of early palaeo-artwork by myself. As you can see, I have been endowed with the gift of realistic drawing since a toddler!

Coelophysis, I think, at 8 years old 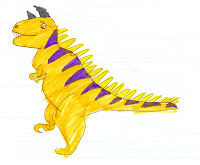 Carnotaurus, probably at 7 or 8 years old.

In black and white, we also have Entelodon and Gomphotherium 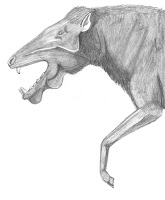 I am more than honoured to have been invited to co-author this blog, as I greatly admire the work of my peers and feel humbled just to be here. My preferred media are colour pencil and graphite sketching pencils. I don’t have any special techniques, or favourite subjects to draw, although I prefer to draw birds, dinosaurs and skulls.

My formal art training has been minimal; I didn’t take art at high school, mostly due to the fact that I didn’t like being constrained, and was constantly criticised. I have taken two photography courses, however, one at AS-level (high school) and again as a part of my undergraduate degree, specialising in wildlife photography. I don’t know if this shows in my work, as I tend to take millions of pictures and then choose the best for my portfolio.