The making of "Once Upon A Claw"

Before things get all Sauropody around here, thought I'd throw up a quick post about one of my 4 pieces for the Anomalocarid gallery. 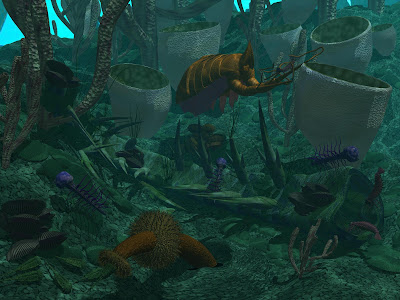 The piece in question is "Once Upon a Claw". This is the second piece from this year I'm quite proud of. The first being of course "Karoo Sunset", and another of my Anomalocaris pieces "The First Great Predator" has this becoming a trend. I'm not used to being happy with my pieces, so this success that ART Evolved has been motivating me towards is most welcome!

You can get a close up look at the details here (for some reason blogger tends to not allow zoom ins on pics I upload), and frankly I put so much work into them I insist you check them out.


There was no single trick to the making Once Upon a Claw, and in fact no tricks at all really. Just a lot of fine detail modelling and composing. The success of this piece is not any single brilliant element, but rather the combination of several alright ones (supplemented by a few substandard ones too). This being in the 3D modelling, their texturing, lighting, and placement.

This little slide show takes you through the 8 days of its creation.

Lastly I thought I'd introduce you to the population of the claw individually. 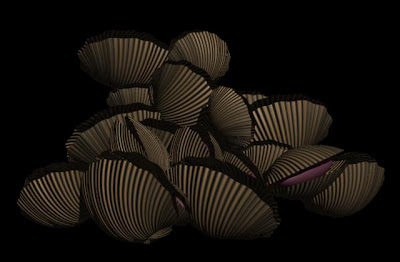 One of the first things I added were these "Brachiopods". Up close they are probably the weakest of my elements as they are actually clams, but the texture gives them a Brachiopod like look far away.

I could probably get away with calling them clams as primitive ones are known from the Cambrian, but realistically they were uncommon and rare. The early Paleozoic was the heyday of the Brachiopods so I'm sticking with them as my desired outcome. I just didn't do a great job on them! If I were ever hired to do a similar piece, I'd have taken the extra time to tweak these into proper Brachiopods (making a calm was easier!). 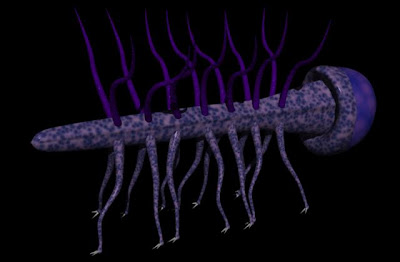 It was when I built this Hallucigenia that I actually started work on Once Upon a Claw. I'd been toying with the idea of a scene full of discard Anomalocaris claws, but had abandoned it when I had trouble coming up with a way to show a claw that'd been on the seafloor forever (it needed to be matted and disappearing under algae and other growth). I suddenly had the idea of instead showing a single claw and how all the other lifeforms of the Burgess Shale were assimilating it into a new habitat.

My Hallucigenia is quite functional, and I especially like the stylized spines on the back. I did neglect the hose like nose on the front end, but honestly that could be remedied in about 1 minute of modelling. So I don't consider it a big issue. 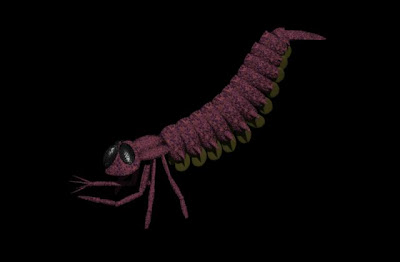 I then grabbed my old 2004 Raydream (3D program... precursor to Carrara that I use now) era Yohoia model to flesh out the population early in the pieces development. I reasoned if I could get an early sense of life around my claw then I'd start snowballing on the creativity. My thinking was correct, and I quickly started doing a lot of new modelling after grabbing this old model.

As the Yohoia wasn't going to be a central element in the piece itself, I opted to merely update its shaders and otherwise use it as was. From far away it looks just like it should. Up close though, it looks like an amateur's model (which it is). Making it another thing I'd put more time into if it with a "real" piece. 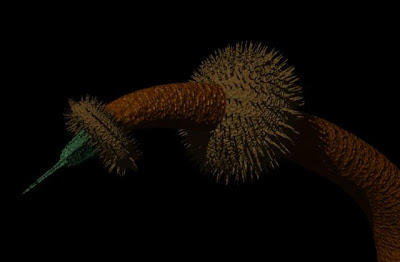 The giant predatory worm Ottoia was my first "modern" Burgess model, though to be fair I did build it last year (making it old skool compared to my modern efforts). Worms are pretty darned easy, and I won't be boasting much about it, other then the shaders. I'm quite pleased with getting segmentations without have to build them into the worm's actual model (which would have made posing it a nightmare!). 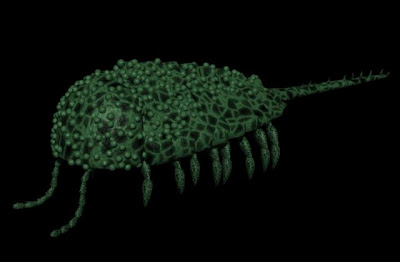 I needed something for the worm to eat, and so I had my choice of the dozen or so obscure tiny Arthropods from the Burgess Shale to choose from. I ended up picking Habelia simply because in Stephen Gould's amazing book Wonderful Life the drawing by Marianne Collins was such a fantastic reference for me to work from.

Despite it almost being a cameo model, it is one I'm most proud of. I not only paid attention to most of the details (apart from gills... which admittedly I'd need to add for a more legit piece) but I rigged the model for posing and possible animation. As a final touch I put a lot of effort into making sure the shader gave this guy camouflage on my sea floor. 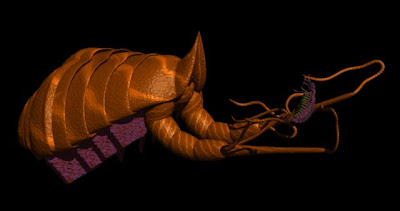 Though the piece didn't need it to be complete, I HAD to build a 3D Leanchoilia as it is one of my all time favourite Burgess critters (here it is eating one of my others Yohoia!). So I figured why not put it in this piece. In the end it actually served an important purpose of framing the claw with life, and thus making use of all the space I had towards the top.

I'm split on this model. The arms and tentacles are a big achievement in model rigging. They are all rigged as one unified piece, and I can move the arm as a whole or just manipulate any of the 6 tentacles individually. However the back end of the body needs more work, and the shaders aren't great. So I may revisit him at some point.

Put all these critters together along with the sponges, borrows, algae, ground, and most important Anomalocaris claw models, shade these all, and finally light them we end up with Once Upon A Claw.

Posted by Weapon of Mass Imagination at 6:14 PM