It's hard to believe that only a year ago this site was launched! So much has happened in that time!

In actuality, ART Evolved as a concept is a bit older then a year. In December 2008, Peter and myself thought up the idea of a multi-artist palaeo-art show. However, when we contacted potential participants about such a show, every one of them thought there was enough interest to go a step further and create a proper blog. So for the beginning months of 2009, in secret, we put together and constructed ART Evolved for its official launch in March.

It was one year ago to this day that ART Evolved debuted, and it has exceeded any of our original expectations. We have been featured in a magazine, been a "blog of note" on Google's official Blogger site, and most important of all hosted 6 highly successful Palaeo-art galleries. 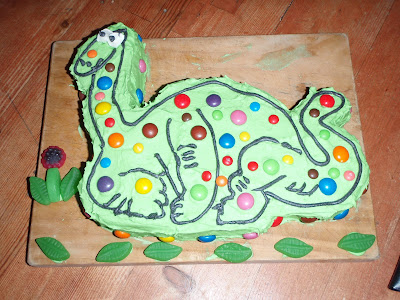 So to celebrate this epic first year, and to get in some palaeo-art on this big day, we present this B-Day cake created by cake artisan Rhonwyn Vaudrey.
So happy blog day to ART Evolved, its members, and participates. We also extend a big thank you to everyone who submitted artwork, wrote posts, or just visited the site for helping to contribute to this great start.
Of course it doesn't end here. Look for an equally exciting second year right here on ART Evolved!
Posted by Weapon of Mass Imagination at 3:50 PM