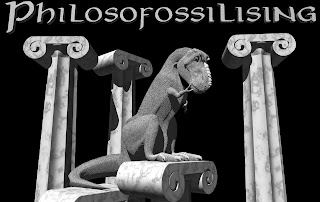 To start off with, everyone is right and everyone has the right. Scientists are spending great efforts at their own cost on outreach projects to educate a Hollywood-brained general audience, enthusiastic bloggers are blithefully propagating the f*cking awesomeness of dinosaurs, including the flying ones, and artists are duefully filling the full pallette of niches from bone transcriptions to viking-ridden, frothing-at-the-mouth theropods. Everyone has the right and nothing is being forbidden. Animated series are announced with Sin-City press posters and theropods pruned by the scissors of budget efficiency and yeah - its all in good spirit. No body is proposing a prohibition of featherless raptors. But the cooler the medium the more convinced will be the generations that come, and the more futile the efforts of the scientists that consulted the film that - hey, they did have feathers and they belong within a lineage that includes the ancestors of our modern birds.

Craig pleads for leniency, Glendon defends the freedoms of paleoart from tut-tutting scientists and Pete also seems to be excusing inaccuracies. At the risk of sounding harsh: why? Why should artistic license have such priority over hard-earned, tested and double-tested knowledge of likelihood and probability? Why should those of us interested in taking the long road to understanding and communicating the riddling complexities and inconsistencies, the fascination of interlinked ecosystems and 3rd or 4th level deduction of probabilities be extra accommodating to those whose interests don't go much beyond a kick-ass T-Rex?

I'm more than willing to accept the issue as a matter of wording: I'll happily surrender the term paleoart to a realm of anything-goes artistic freedom. Or at least part of me would... the other part of me recognizes how long the battle would be to establish whatever new term then stands for the same thing in the minds of a public disinterested in differentiations and shades of gray. But okay - I'm willing to talk palaeontography (explain that to your grandma) or paleo-illustration. But I suspect this path leads to an elitist ghetto of those in the know talking down to the enthusiastic plebes.

The goal has to be to transfer the kick-assedness from the brand names of roaring T-rexes and rearing sauropods to the encompassing processes of knowledge and respect. An uphill path, but the only one that leads to an inclusion of the masses on a basis of shared knowledge. All the downhill paths lead to frustrated enclaves and endless diaper-changes - poo-pooing the stubborn, and yes - talking down to people because they're simply not interested in the basic premise of paleontology. Dinosaurs are not organic Transformers. They were not created to sell merchandise or satisfy your creative urge. Being a dinosaur freak obliges one to a passion about the natural sciences as a whole, and ultimately to a respect for the systems within the planet we live on. Point.

Peter referenced ‘accuracy’ as meaning “the condition or quality of being true, correct, or exact; freedom from error or defect.” More or less an absolute state, as there is no perfection in the real world. Interestingly, plausibility is defined as having an appearance of truth or reason; seemingly worthy of approval or acceptance; credible; believable. The definition is all shades of gray, reeking of questioned authority: well-spoken and apparently, but often deceptively, worthy of confidence or trust: a plausible commentator.

That actually appeals to me... we're creating images that are worthy of trust but not above questioning, and ultimately, knowingly wrong. New discoveries will prove them so, but the images will still be admired as historical documents and - if we manage to climb to the heights of the form, still ooze fascination.

Posted by davidmaas at 5:01 AM