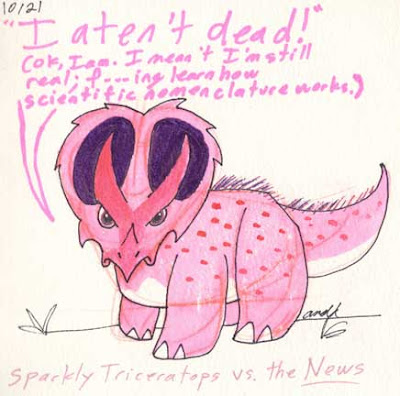 Pink Triceratops by Trish Arnold
Gel pen, Sharpie, highlighter, glitter, and watercolor. Prompted when I learned that -*sigh*- there are still people out there who don't "get" the deal with Triceratops.


(It's a not-widely-accepted-unless-we-get-concrete-evidence theory that maybe Torosaurus is just a really old and cranky Triceratops. So if that turns out to be the case, Torosaurus remains will be relabeled Triceratops. Triceratops isn't going anywhere and, sadly, that's the main misunderstanding that the mainstream news got horribly wrong.)
Learn more about the Pink Dinosaur Cancer Fundraiser here.
Posted by Peter Bond at 4:49 PM