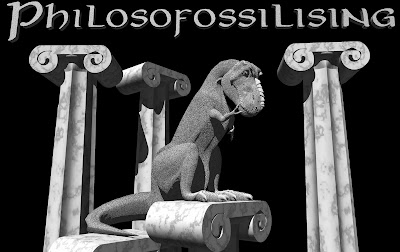 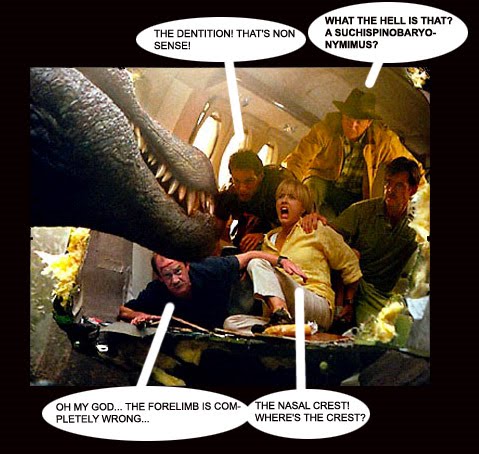 Some great thoughts on what paleoart is and isn't here already, and I can only stand on the sidelines for so long. Here's my take:

Paleoart is obviously art - the name says so. And since no one can agree on what that is, I'm not going to make the mistake of offering any answers here... I couldn't do better than the talented Andreas Cau in the image above. What a great summary. It has everything: the geeky latin name-throwing, the pop culture fascination and a wonderful humor. Paleoart is art, and thus a matter of its perception.

This changes drastically if you follow John Conway's lead and call it palaeontography however. Then you cut the camp out of it and focus on the intent to communicate, illustrate. Whether you take the art out of it in the process is another question... I think not. But palaeontography certainly sounds a lot less fun than paleoart - it sounds like measurements and analysis and scientific debate. If that sounds like fun, you may be the palaeontographic breed of paleoartist. You're more likely to understand the power that you wield in your pen - be it ink or wacom: the power to prove. Because if you draw it, it's out there and it unfairly has an impact that the science itself lacks. 3D realism has the added punch of potentially making something look as if it really was photographed, and thus assumed to have existed as presented... one of my gripes with the overall praise-worthy 3D visualization ala Walking with Dinosaurs. There's the responsibility of paleoart. You have the long years of a number of people in your hands - a community of fossil-hunters, preparators, scientists and publishers. This responsibility generally follows two different tactics: get science in there and keep implausibility out. The remaining space is there to - bluntly put - make it rock.

The purest form of palaeontography is the drawing of fossils with the intent to create a document which states and which communicates (I here prove my point by being unable to name the artist of this coelacanth). There is a lot of skill and knowledge involved in this, but this type of work is seldom admired to the degree that life reconstructions are.

That it doesn't have to be this way is demonstrated by Ernst Haeckel, whose drawings prove themselves to this day as valuable artistic prints, or the scientist David Goodsell who creates fantastically beautiful work of his research with the cellular subjects of his research. The initial intention in both these artists was to illustrate in the literal sense of the word: to show, to make clear. As they delved into their subject matter and mastered their craft, their imagery began to stand for itself, while retaining their function in transporting scientific knowledge. While Haeckel only partially engages in paleoart (here his ammonites) and Goodsell not at all, both are role models for how aesthetically ambitious scientifically accurate paleoart can be.

One of the most influential artists in this direction has been Greg Paul, who goes beyond the fossil into its reconstruction... the skeletal as seen below, or the life reconstruction. The intent then is to visualize his vision of the creature in question as plausibly as possible. The skeletals have less conjecture, the life reconstructions a good deal more. The formulation is very important: What could the animal have been like? The drawing is a proposition and acts as a sort of dialogue. The animal is presented as a sum of scientific discussion. There is a good deal of imagination involved in this work, and the reaction in the general public has been immense... up to the point of introducing a paradigm shift about how we view dinosaurs. Despite the large amount of fantasy employed in this art, I still categorize his drawings within the scientific approach.

This approach can be very exciting when it comes to communicating movement an biomechanics. This illustration by Julia Molnar is at the top of my "achieve this" list.

This other approach is best presented via the work of Douglas Henderson. His steps back and shrouds the unproven details in atmospheric landscapes. Its like a safari snapshot. He favors every day river-crossings and stand-off encounters over sensational beast vs beast moments. Despite his deep-rooted knowledge and apparent amount of research, the details of anatomy and behavior are only alluded to. He leaves them to be filled in with the level of knowledge that the viewer brings to the table.

There are endless degrees between these approaches, and others that focus on a translation to anthropomorphism or a dramatic function within an entertainment format. I also hope to revisit this discussion with the question: what can paleoart offer the paleontologist? Beyond inspiring future scientists, I'm convinced that there are opportunities for visualization and art to pay back a scientist's engagement in consulting its creation.

But, enough for now. Keep the discussion going!