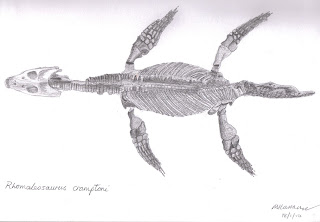 The above illustration is of a cast of the holotype (original specimen) of a species of pliosaur, a marine reptile closely related to plesiosaurs, which generally have longer necks. The cast is one of the two main focal points (in my opinion) in the Fossil Reptile Gallery (the other one, see below, is not even a reptile) at the Natural History Museum, London, where I tend to spend a lot of time. Today, I felt compelled to sit and draw two beautiful specimens, and am quite proud of my effort.

I rarely used to get the chance to draw specimens at the Museum, as most of my time formerly got taken up by work of some description or another. I’ve been a Masters student, a volunteer and a librarian at the Natural History Museum at different points in the last few years, but now, despite doing some voluntary work in the Palaeontological Department, I have a lot of time to kill. So what better way to murder time than to draw skeletons.

I chose the Rhomaleosaurus to draw today for a number of reasons: (1) its sheer beauty and size; (2) it is one of my favourite specimens in the Museum; and (3) there is a bench placed conveniently opposite the specimen. I started by drawing a sketch of the entire animal, to make sure the whole thing fits on the paper. I am notorious for leaving off ends of tails and bottoms of feet because I don’t tend to plan ahead. This time I made sure the entire specimen would fit on a piece of paper 6 inches across.

Once I had a good idea of how it would fit, I began to detail, starting from the left hand side and working towards the right. I much prefer to draw animals that are facing the left; if you look at most of my portfolio (much of it can be seen on my blog, The Disillusioned Taxonomist) you can see this – it must have something to do with being right-handed. There may have been a subconscious decision to pick this specimen because it is facing the left. I detailed the skull, making sure all the holes were in the right places, and shaded the lower portion (from a viewer’s perspective; it is really the left part of the skull) darker than the upper side. Once the entire skull was shaded, I moved down the body.

Next came the cervical vertebrae, which, varying in state of preservation, were a challenge. There is a definite “ridge” across the midline of the specimen which appeared palest, creating a shadow beneath them to the left side of the animal’s neck. The number of vertebrae may not exactly match the real specimen, as I may have had to miss out a few or add a couple to fit!

The paddles were a fun part to draw, and I started on the top left one, the animal’s fore right paddle. First came the humerus, the ulna and the radius, then the small rounded carpal bones, followed by five digits made up of varying numbers of phalanges. The way that the cast was produced meant that there is a dark matrix around the smaller bones in the paddle, but this can be seen to represent the cartilage which was probably present in life, as whales have.

The rest of the vertebrae up to before the tail were much like the cervical vertebrae to illustrate, same dorsal ridge and shadowing. The ribs were more challenging: I wanted the ribs to appear shaded, like the same colour as the rest of the fossil, but paler than the areas between the ribs. In doing this, the ribs were hard to see, so I took a rubber (eraser) to the ribs and did my best to highlight them.

The hind paddles are very similar to the fore ones, and although the phalanges on one of the feet can’t be seen too well on this scan, they are roughly the same as on the other one. A small portion of the pelvis can be seen above the lower right paddle, and that created shadows on some of the femur, which I tried to indicate with darker shading.

The tail of the animal is poorly preserved, and the individual vertebrae cannot be made out clearly. I gave the entire tail a “base coat” of pale shading, adding darker patches to indicate shadows where I could see them. Some vertebrae could be made out, but only on the darker underside.

I really enjoyed drawing Rhomaleosaurus and want to try some of the other marine reptiles: there are plenty of plesiosaurs and ichthyosaurs to choose from, and a couple of mosasaurs, marine crocodiles and a stegosaur. 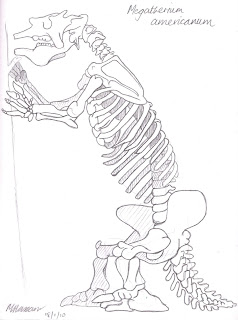 After lunch, I decided to draw the other focal point of the Fossil Reptile gallery, a mammal. A giant ground sloth in fact, which is a cast of a fully grown animal standing on its hind legs and leaning against a wooden pole. There is no bench on which to sit, so I sat on the floor on top of my jacket.

I decided to go for a different tack to draw this animal; although detail was needed, an outline sketch would show more clearly the shapes of the bones rather than the entire thing shaded in dark greys and black. It is in a dimly lit corner of the gallery, right by the entrance to the Palaeo Department, and it is hard to get perspective of the individual bone shapes.

Having said that, I think I have given a good impression of the specimen, highlighting some bones that may not be immediately visible to those looking at it directly or at a photograph or detailed drawing. Take the hyoid bone, for example, which is at the front of the neck, a V-shaped bone which anchors the tongue and is present in most mammals and is often missed out when reconstructing skeletons in museums. All five digits of the animal’s left hand can be clearly seen, although it was difficult to make out the outlines of each phalanx or metacarpal, so I had to guess a bit. Digits II and III have huge claws, while the thumb is much reduced.

I created depth by using diagonal lines instead of smooth shading. Parts of the specimen in the foreground are not sketched in, and those furthest in the distance (the right shoulder blade, for instance) are shaded with closely-barred lines. This is not to indicate shadow, but distance, so you can tell which ribs are in the foreground, and hence which are on the animal’s left side.

Again, I started with a rough sketch to get the outline. I was a little concerned at first that the head was too large and the hind-quarters a little small, but they seem to be OK. I outlined each bone as I saw them, starting at the skull and mandible, moving down the neck to the shoulder blade, fore limbs, rib cage and sternum, backbone, pelvis, hind limbs, and tail.

I intended to describe my drawing technique in this post, but I don’t know if I’ve done that... if you have any particular questions to ask about this, or the specimens, or anything, say so in the comments! Thanks for reading!
Posted by m at 3:26 PM