Last year Kalliopi Monoyios put up this amazing post on Symbiartic, that forever changed my approach to marketing my art. Go read it, but I wanted to expand on it with a few twists of my own (which have seen me now land two museum exhibits).

Kalliopi had a great section on how to put your signature on a piece. I've not only followed her to the letter, I've expanded on her technique a bit.

Purpose of a Signature

This might seem obvious at first, but it never hurts to repeat and remind. We all the know the purpose of a signature is to identify a piece as your own, but there are two direct but different purposes to this.

Property- Right away a signature denotes not only the creator of the work, but additionally who the owner of it as well.

Promotion- If a signature is obvious it can work as an excellent part of your promotion when the art is first looked at by an interested party.

There are a ton of different ways to sign your work, but here are some ways work that don't use the signature to its full advantages.


This is an example of how I was signing my work as of the summer of 2011. The idea was a minimalistic stamp that denoted the work was mine (in the case of attempted theft or misuse), but otherwise didn't ruin the overall piece. The problem being of course any interested people would never find my name without a very exhaustive search for the nearly invisible signature (it is in the wood paneling below the Dinos belly). Meaning I'm missing out on promotion from the piece itself.

Another silly one I used to do (back in the Traumador days) was signing everything with one of my online aliases. This is just confusing and unprofessional. Don't repeat my mistake, just sign with your (full) name! No one is going to take an alias as seriously as you being yourself.

Now I've never signed my work like this, but I've hit several professional palaeo-artists who do. The idea here is your name is really out there, and it is obscuring the piece (so no one else uses I think is the theory).

In my opinion though this is not a good idea (especially if you aren't a big name pro yet). It ruins your art (enough said really). When I hit pieces like this, even if they are brilliant, my attitude/opinion of them gets a little tainted. I can't fully appreciate the art on its own merits, as I have to waste so much effort trying to see "past" the signature.

Instead of obscuring the art with a signature, if you're worried about misuse, instead just post a really low resolution version of the picture instead (400X400ish). That way people get a real feel for the aesthetics and look of the piece, without being able to do more than that (you can't do anything useful with that small a pic).

The only golden rule for digital signatures...

The only thing I am going to say about any signature you add via a computer is make all your signatures somewhat transparent. If they don't bleed into the piece the add distracting visual information for the viewer. Taking the edge off the writing with a bit of transparency makes the signature a bit more a part of the piece, and thus doesn't compete with your imagery as much.

If you sign your stuff in a non-digital medium ignore me, as you already know that being the same medium as the piece it'll just blend on its own...

Now there are a million options on how you can sign your work, and don't feel I'm saying this is the only way. If anything my signing process has been evolving the past year, so go play with yours yourself. I just offer this as a starting point. 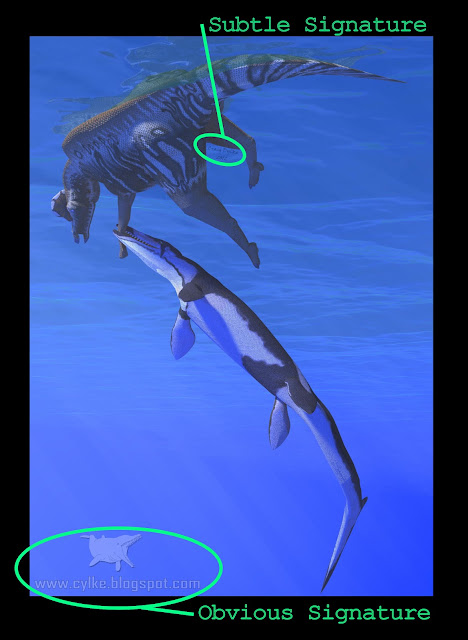 I do one big "in your face" signature (my website), and one subtle but still visible signature (my name and the year). I figure the web address is the important information I want people to get from my pieces about me, if they've found the picture elsewhere on the web.

I place the address in the least important corner of the piece so it doesn't take away from the visual or the narrative. Yes this puts it at the risk of cropping by a misuser, but that is why my subtle signature is in there, as a backup. 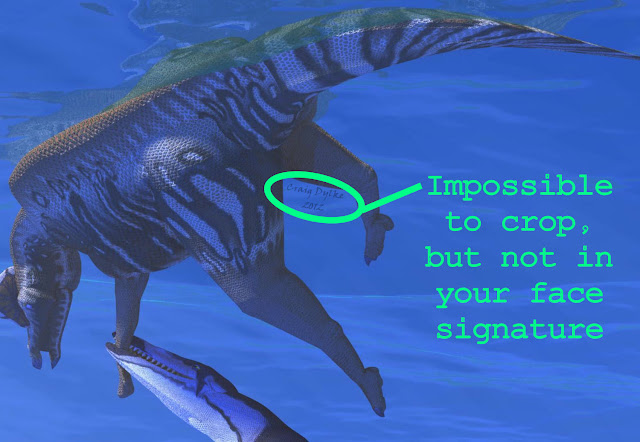 The subtle signature is a tip right out of Kalliopi's post, and so I merely restate here. The idea is that you put your full name somewhere important, so it won't be cropped, but not big enough or harsh enough to distract from the piece. On critters I tend to put it somewhere near the rear limbs/tail.

Good luck signing your own stuff, this is me signing off... pun intended :P