Can you escape style?

Can palaeo-art reconstructions escape unintended effects from their creators style?

I'm not pretended to be the first to ask this question, nor is this as serious stab at really answering it. I present for your two takes on the same subject that demonstrate how the artist's style can really affect a palaeo-art reconstruction.

I threw together the shader for this Taniwhasaurus to celebrate New Zealand finally winning a Rugby world cup on home soil (after the awful time they've been having in Christchurch this past year). The model is a long standing one I have been rebuilding and overhauling since 2007!

The white line pattern you see on the Mosasaur's hide is a common New Zealand artistic motif influenced by traditional Maori art. Of course there is next to nothing natural about such a colour scheme. No animal is going to adorn itself in nationalistic patterns to conveniently match the human nation state it lives (or lived) in.

Still I choose it because I wanted to make a kiwitastic Mosasaur. A few years ago and I could claim a scientific basis for this move. As originally Taniwhasaurs were only known from New Zealand, and thought to be an isolated genus of kiwi marine reptile. The name Taniwha itself is kiwi being the name of Maori mythological monsters.

If Taniwhasaurs were just from New Zealand my version while not being"realistic", could be argued to be a metaphoric accuracy. Maori patterns are quite recognizable as kiwi, and so my Taniwhasaurus is locked to its place in the world...

The problem is recent fossil discoveries of Taniwhasaurus elsewhere show that it existed throughout the whole southern Pacific in Cretaceous times. Meaning my stylistic choice is actually very misleading (especially in conjunction with the Maori name). In the old paradigm of Mosasaur wisdom Taniwhasaurus was a quaint remote relative of the better known Tylosaurus of North America.

My piece lends visual support to this, by tying Taniwha to just New Zealand in its visual connotation. In reality Taniwhasaurus is starting to look the widespread animal (through out the open Pacific) and Tylosaurus was the remote isolates genus (to just the North American interior seaway).

A critter so loaded with implying visual language about Taniwhasaurus' geographic origin, in hindsight I feel a little guilty. It is a very misleading rendition from an educational standpoint. Taniwhasaurus should be thought of as a far more widespread and important animal than it currently is, yet this one ties it solely to New Zealand. 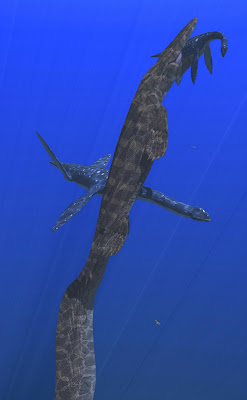 We have been going through something of a Mosasaur revolution the past 2 years. We know a great deal more about how they look and should be reconstructed then ever before. Back in the old days they were depicted as weird finned water dragons, but this was based on incorrect information. So despite having gotten past this traditional view of Mosasaurs, before 2010 there was a lot of uncertainty as to how one reconstructed a Mosasaur "properly". Really the only certainty offered was don't follow the "old school" approach.

There were clues and hints as to what would become common knowledge in 2010, but in the period before that we artists had a lot of wiggle room...

Of course I took that inch of doubt and ran the mile with it. At that stage I was fascinated with the idea of Mosasaurs being giant marine lizards (literally what they were... however I wanted to make this completely literal!). They were still seen as swimming like giant lizards so I wanted a completely lizardified Tylosaurus.

Two years almost to the day I completed the monitor lizard Mosasaur above. I was going for a super primitive lizardine Tylosaur, which I feel the texture and slight monitor lizard tweaks to the model really accomplish.

Was I right to do so though? At the time, 2009, it was not out of the question. I certainly wasn't going off solid science, but the science wasn't there to tell me no. A lot of people were implying the revision was coming down the pipes, but they weren't saying what the revisions actually would be.

In 2010 my primitive marine "lizard" suddenly became out of the question. It turns out adaptive pressures on ANY vertebrate trying to live in water will force you to evolve into essentially the form no matter how distantly related you are from one another.

So in hindsight the lizard direction for my Mosasaur is probably worse than my Maori one. Granted when I created him there was nothing outright wrong with this visual hypothesis (there was nothing right either!). Now he is just downright wrong, and frankly very misleading! 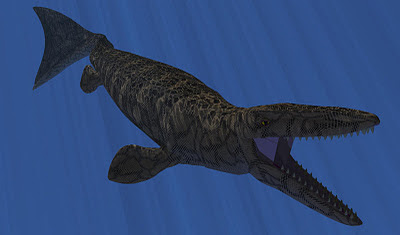 Turns out Mosasaurs had tail fins and swam more like Ichthyosaurs, dolphins, and fish rather than a lizard or crocodile as was once thought. They also were no where near as limber or flexible as once thought. They were in essence reptilian whales, who were the second line of such reptiles, and come to think of it whales should really be thought of mammalian knock offs of these reptiles...

I was right on board with the revision when it went down in 2010. I threw together this version, with direct input from one of the scientists who initiated the revision. How could anything go wrong with him?

Well at the time I didn't get around to switching the colour scheme. Which resulted in this funny version of my Taniwhasaurus. It has the sleek cutting edge marine physique that is supper modern and accurate (for the time being anyways), but yet primitiveness clings to this version through the skin colour and configuration. This sharp juxtaposition is best summed up as the newest model Aston Martin having interior upholstery done up in ultra retro hounds tooth...

The Maori paint job was my first crack at modernizing the colour pattern on this. Perhaps I modernized it too much. Bringing it into contemporary New Zealand and all.

I have nothing more profound than this to wrap up with.

That was all I wanted to do. Show a few examples from my own artistic past to perhaps help you consider the effects style can have on your own work. Whether intended or not.

I'm not finished with style though. Not by a long stretch. My recent tinkering and playing has me thinking about style like never before. I plan on rendering my AE pieces through different filters and settings for future galleries, in an attempt to see how different styles turn out or look. So expect more discussion on style in the future.
Posted by Weapon of Mass Imagination at 8:04 PM