Tempus fugit. No kidding - my tempus has fugited like a mad thing this summer and it's taken until now for me to post the next installment of my occasional series on Building a Dinosaur in 3D over at Paleo Illustrata. Now we get down to business and actually start the modelling process, pulling polygons and dropping symmetry objects in our pursuit of the mighty Triceratops. 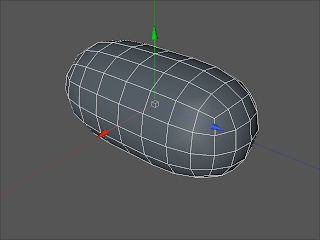 From this egg-shaped blob will emerge a beautiful Triceratops . . . hopefully.
It's worth checking out 3D World magazine, which has a feature and tutorial on the subject of modelling dinosaurs and is definitely worth a pike.
Posted by Stu Pond at 9:59 AM