The Long Road to Failure

A long, long, long time ago, my buddy Will Baird (of the Dragon’s Tales) suggested collaborating on an interesting spec project: the alternate Permian, a place where the Permio-Triassic extinction never happened (or at least happened much slower) and non-mammalian synapsids came to rule the world instead of reptilian archosaurs. This idea intrigued me, but it also intimidated me—I knew virtually nothing about those critters. We focused first on developing a neodicynodont that we lovingly called the “walrodont” because it converged on walruses. Here’s the initial skeletal I did so long ago. 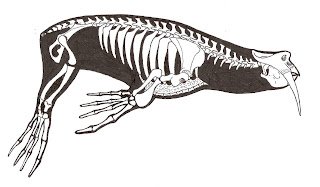 The walrodont went through more changes than any other creature in our bestiary, as I was never convinced it could be real. Many versions exist, but only a few survive. We also collaborated on some more neodicynodonts illustrating a host of semi-aquatic roles. These included the compact, big-headed hippodont; the lithe, long-toed desmodont; and the transitional form between those two, the sirenodont. You can see the desmodont and hippodont here. The sirenodont is in PDF form so I've gotta...work that one out. It's not bad, let's say that.

We initially focused on a few other critters too, namely what the gorgonopsids would be doing. I suggested they would evolve into dog and bear roles, and this shaggy, amphicyonoid critter came out of that idea. Notice the prominent canines. Gorgons already have big ol’ canines, but I liked the idea that they would become hypertrophied in at least a few species. Big canines are a consistent theme in synapsid evolution. 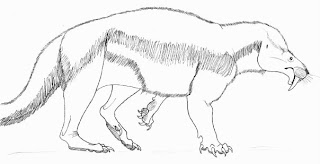 Will said it was too furry (I agreed), and I thought the anatomy looked forced. I decided to make it sleeker and less furry, with an emphasis on pectoral musculature so the beastie could pin down its prey before delivering the death blow. This is the sketch that followed those new rules, along with a juvenile Dromaeosuchus, or sprint-o-croc, another Alt-Permian beastie. I realized that the “ursonopsid” (as we were calling it) looked more like a barbourofelid nimravid, so I started calling it the “barbouronopsid.”

We decided that this particular barbouronopsid would chase down the beach-loving desmodonts and sirenodonts, but what ate the walrodont? Well, how about a big marine hovasaur? Hovasaurs are basal diapsids with long, webbed feet and dorsoventrally expanded tails. I took an average-sized hovasaur and made it longer, and gave it orca colors because orcas are awesome. These would be the key players in the Art Evolved piece. I started with this sketch: 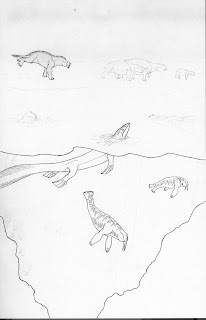 I used the power of Photoshop for the rest. This process went through several troubled stages. I went into this project with the goal of creating a piece without outlines, and while I succeeded in that effort, it’s clearly something I need to practice. 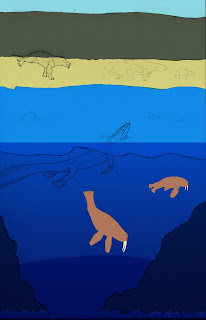 I modeled the landscape (OMG—context!) after a cliffside beach near my house. The final picture was supposed to have a little Euparkeria-type archosaur eating a shellfish, but there wasn’t really enough room. I have no idea what Permian vegetation looks like, but Will consulted me there, thus the giant fern-things on the top of the bluff, and the weird seaweed towers in the water. And look at those crinoids! I purposefully used big, exaggerated strokes on the crinoids. My goal was to make them look a bit “out of focus,” but because I don’t know how to use Photoshop, I don’t think that’s how it looks. 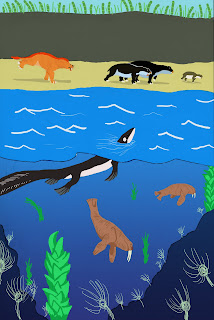 The water was modeled after Wind Waker. In fact, the whole goddamn piece was supposed to have a Wind Waker color scheme to it, but it just looks wierd and incomplete. So there you have it, folks: the long road to an EPIC FAIL. Definately not one of my best pieces, though I learned a lot by doing this, so that's...some consolation. I guess.