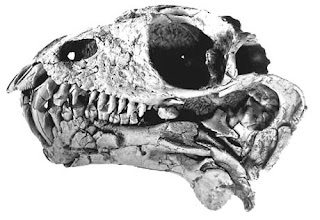 Greetings, fellow paleo-artists! Gettin' ready for the May 1st art show? As you know, the topic is "Synapsida," but I'm afraid we're limiting that somewhat. Were we focus on the "Synapsida" in all its glory, we could potentially have such basal taxa as Ophiacodon right next to Mammuthus or Canis. That's not kosher. Synapsida is as diverse a brand as Sauropsida (they are sister groups, after all). So in an effort to reduce phylogenetic distance and, thus, confusion about what the show is actually about, I'm announcing a change to the lineup: the May 1st art show will focus on Permian synapsids. If I really wanted to screw with everyone, I would say Late Permian synapsids, as that would exclude pelycosaurs like Dimetrodon and Edaphosaurus. But I won't be mean. However, that doesn't mean you can all do pelycosaurs because you're comfortable with them. Basal synapsids are wondefully diverse and wierd, and include such bizarre clades as the theriocephalians, dinocephalians, gorgonopsids, anomodonts, and more! None of these groups left living decendants.
I think we have a real opportunity to educate at Art Evolved, and Permian synapsids are woefully obscure. Let's bring 'em to life, folks! By the way, the wierdo above is Suminia getmanovi, the first herbivorous vertebrate to develop a shearing bite. See? Permian therapsids are awesome!
Posted by Zach at 11:45 PM