[I'm embarrassed to say that this post is very very overdue! It was meant to coincide with the launch of our "new" banner back in February, but I've had several distractions in the interim. Please accept my apologies everyone]

Ever since the launch of ART Evolved we had never been 100% happy with the initial banner we started out with. It is seen here below, minus the Trilobites that were added to it later.

The idea had been to show the skeleton on the left inspiring and leading up to the recreations on the right. However this didn't really work. The only clear indication was the theropod in the middle, with its half being drawn in and half not. Diminishing this narrative effect was the fact the wrong ends were coloured in and not. Overall this just wasn't going to do.

Then one day an idea hit us administrators. We had a whole site full of very talented artists, why not get them to help us fix it! A multi person piece of art would do just the trick to capture the diversity and variety of palaeo-art, and as a bonus incapsulate the community nature of this site.

This Tyrannosaurus Rex skeleton was sent out as the basis for the banner, and the idea was members create their own T-Rex to match up with this skeleton so we could seamlessly stitch the various pieces together easily.

This was the result we got. We are rather pleased with it!

However the individual pieces we received are rather impressive on their own, and have up until never been seen on their own (or properly credits OOPS!). So as to fully credit (and show off the talents of) the contributors here is our Banner Gallery...

The Banner is composed of parts of the following pieces by: 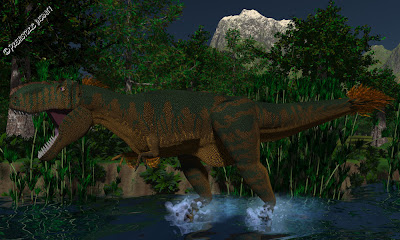 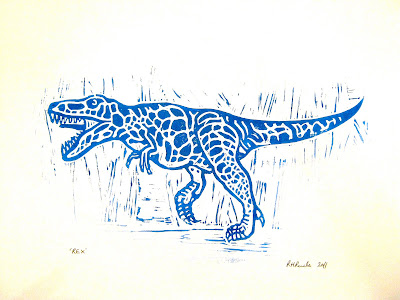 Thank you to all these contributors!

We hope you enjoyed this mini gallery, the art contained within it, and ultimately the piece they have combined into in our banner. Hopefully the new banner captures the diversity and community themes we had always envisioned heading up this site.
Posted by traumador at 5:10 PM