Last month, I spent some time in my beloved Natural History Museum (not mine, of course, but it's mine in the sense that I've spent a rather large chunk of my life within its walls) drawing some of the mammals. I was spurred into it by the need to create new content for the (then) upcoming elephant gallery. 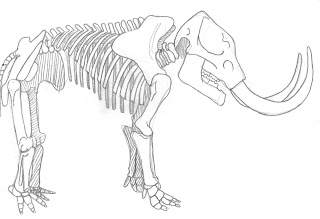 I decided to draw the American mastodon because the skeleton was in a convenient place to sit/stand, and it was fairly quiet. Although the mammal halls in the NHM are usually fairly popular, few people go to the 'dead end' that is made up of a woolly mammoth Mammuthus primigenius skull, a Stegodon ganesa skull, and the mastodon skeleton. 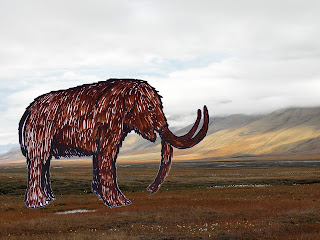 I then thought I'd try something different; I brought along some clear acetate sheets, like those used for overhead projections, and marker pens. After completing the pencil drawing, using that and the actual specimen as a guide, I drew an outline of the mastodon as it would be with all the layers of muscle, fat, and fur, including the boneless fillet that is the trunk. I was somewhat happy with the end result, but thought of superimposing a tundra backdrop afterwards. 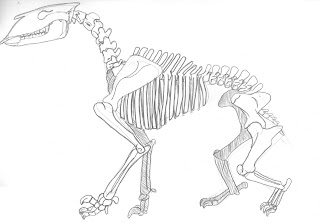 Moropus isn't an elephant, or even a proboscidean, so it didn't end up in the ART Evolved gallery. This is the first place outside my sketchpad that this piece has been seen. Moropus was a chalicothere, a member of odd-shaped herbivorous mammals with relatively long forelimbs and short hindlimbs. They have well-developed claws on all limbs, and possibly used them to pull down leafy branches from up high to feed on. I didn't produce an acetate reconstruction of Moropus, but I might one day. 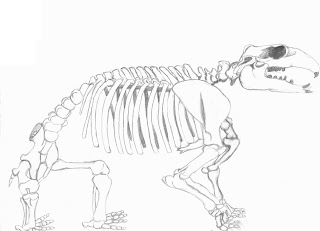 As you can see, I did this drawing over 2 years ago, whilst I worked at the library at the NHM. Paleoparadoxia is a member of the order Desmostylia, within the group of orders known as Afrotheria. The Afrotheria consist of six extant (surviving) orders: Proboscidea (elephants); Hyracoidea (hyraxes); Sirenia (manatees and dugongs); Tubulidentata (aardvarks); Afrosoricida (tenrecs and golden moles); and Macroscelidea (sengis, or elephant shrews). There are also a few completely extinct orders, one of which was the Desmostylia.

They mostly lived around the northern Pacific Ocean, with localities mostly in Japan, western Canada and the western United States. Several genera have been named, and although it is believed that all desmostylians were aquatic to some extent, some were more ocean-going than others. The main evidence for such a conclusion is bone density, which reveals just how heavy and able to sink or float the animals were. 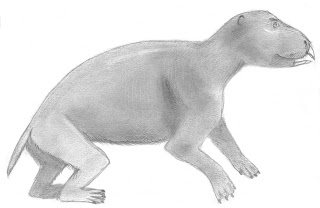 Whilst at the Museum on the day I drew the rest of the specimens, I thought I'd do a life reconstruction of this desmostylian. I'm not very happy with the way the face has turned out, as I don't think I've drawn the teeth accurately at all. In my defence, the specimen on display is quite poor, and a lot of liberties have to be made as to tooth count and position of limbs. 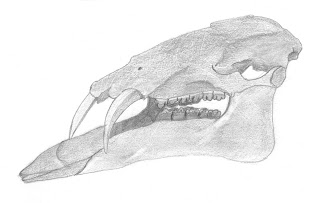 And this is the other new piece I submitted to the elephant gallery. Phiomia was a small, early proboscidean with a short trunk. A skull is on display next to a reconstructed model of it. My own reconstruction, therefore, was unnecessary. Also, I only had the skull to work from.