Know When To Fold 'Em

Above: Maximum wrist folding for the theropods studied by Sullivan et al. 2010. Not to scale.

To continue talking about aspects of maniraptoran anatomy that can be a bit vaguely defined in the minds of paleoartists, I'm going to write a bit on the issue of wrist folding. As most of you will know, a major characteristic of maniraptorans is the semi-lunate carpal, the half-moon shaped bone in the wrist that allows the blade of the hand (metacarpal 3) to fold backward toward the forearm (ulna). While this is common knowledge among paleo buffs and artists, what seems to be less understood is exactly how tightly the hand (and in aviremigians, the wing) could actually fold up. I myself have never been too clear on the issue, and there don't seem to be many papers addressing this. But in the last few years, a few papers have come along that can help shed light on the subject. The first was Senter 2006, which studied the full range of motion in the forelimbs of two dromaeosaurs, Deinonychus and Bambiraptor. The second was Sullivan et al. 2010, which examined the range of motion in the wrist of several species representing each major group of non-avialan maniraptorans.

Both papers, however, present geometric data that can come across as a bit inaccessible for your average artist, so I'm going to try to break down their conclusions for those of us who are more visual thinkers. The Sullivan paper, in particular, discusses the degree to which the wrist could fold, but doesn't necessarily provide diagrams or even final angle between the metacarpals and ulna for each species that could be used as a simple reference. I've done my best to translate their findings into the image at the top of this post, using modified skeletal diagrams by Scott Hartman and Jaime Headden.

Above: Anatomy of a maximally folded wing of the Wild Turkey Meleagris gallopavo, modified from Sullivan et al. 2010

The degree of wrist folding is controlled by two wrist bones. The cuneiform, on the inside where the wrist meets the bottom of the distal ulna, provides an inner limit. The cuneiform blocks the hand from actually touching the ulna. The radialae, on the outside of the fold, forms the surface which the wrist cannot fold beyond. This is basically a little process anchored to the tip of the radius where the top part of the hand articulates. The hand can obviously not fold beyond the angle of the radialae, or the animal would dislocate its wrist. Therefore, the angle the articular surface of the radialae forms with the ulna is used as the key factor in determining maximum wrist folding by Sullivan et al. Again, see my interpretation at the top for how their results likely translate into life position.

The results show that in almost all maniraptorans, the wrist could not be folded to the same degree as modern birds (for comparison, see the photo of the turkey wing above, which is at its own maximum folding point). Note that in actual, functional angle of folding in the turkey is 57 degrees between MCII (where the feathers attach) and the ulna. To see how this translates into a live animal, here's a photo of wild turkeys nicely showing the way the feathers fold (photo by D. Gordon E. Robertson, from Wikipedia, licensed): 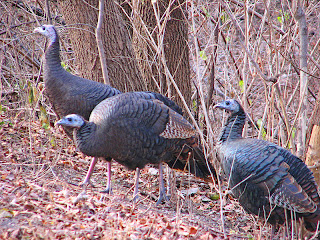 The wrist is located about where the coverts form the point of a triangle, following the line formed by the border of the the brown secondary (ulna) feathers and white banded primary (metacarpus) feathers. Note that with the wrist folded at a 57 degree interior angle, the feathers (especially the secondaries, which help cover the primaries when folded) are basically stacked one on top of the other with little to no fanning out at the tips. This is because the feathers also have some ability to move at their bases, and can themselves fold relative to their anchor bones through muscle and ligament action. 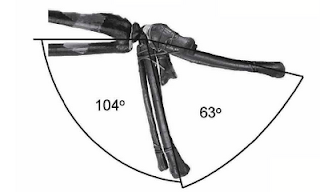 Looking at the aviremigians in the diagram up top, it is apparent that their wrists could not fold tightly enough to fold the wing feathers to the same degree as a modern turkey. Small deinonychosaurs like Sinovenator and Bambiraptor could achieve close to a 100 degree angle (see image of Bambiraptor wing folding above, from Senter 2006), but larger ones like Deinonychus seem to have lost some of that folding ability, presumably for increased use of the forelimbs in predation. Indeed, if Deinonychus retained long remiges, they would hardly have been able to fold at all, and would have been permanently fanned out (not that this would have gotten in the way of grabbing prey, as Senter pointed out). This lack of ability to tightly fold the wrists may have posed a significant problem for those species with very long remiges, like Microraptor gui. Dave Hone, who was a co-author of the Sullivan paper, discussed alternative ways they could have kept their remiges free of the ground at his blog last year.

In pygostylians, the degree of wrist folding began to approach that found in modern birds. Eoconfuciusornis, for example, could fold its wing to about the same degree as a turkey. Where it gets weird is in the oviraptorosaurs. As I mentioned in my post on the Ashdown maniraptoran, oviraptorosaurs (at least the small basal ones like Caudipteryx) seem to have been capable of folding their wings far beyond what is possible for even many modern birds. It's unclear why this is so, especially as the remiges of Caudipteryx, while clearly for display, are not exactly very long compared to the body. Certainly its wings were much smaller than those of paravians, which would have presumably had more need to fold them up. I've seen this mentioned as possible evidence in support of the hypothesis that oviraptorosaurs are in fact avialans, and that the extreme folding of the wrist was inherited from flying ancestors, though I can't think of where. Sullivan et al. do note that more than folding up the remiges to keep them safe from wear and tear, wing folding is an important part of the avian flight stroke, and it makes sense that it would have become more developed in flying forms.

Anyway, we've only got a handful of specimens that have been specifically studied in regards to the degree of wrist folding, and there may well be exceptions in each maniraptoran group, where certain lineages independently evolved a greater or lesser degree of wrist folding from their ancestors as seems to have happened in therizinosaurs, where the derived Alxasaurus can fold its wrist more than the basal Falcarius, and deinonychosaurs, where the relatively derived Deinonychus can fold its wrist less than the more basal Bambiraptor. So this guide shouldn't be considered as a set of hard and fast rules, but rather a starting point for artists who want to make their restorations as plausible as possible.

Finally, a few days ago I posted a teaser for this post challenging people to determine what aspect of the above Deinonychus illustration was incorrect. By now it should be clear that the wrist is folded too far back. Appropriately enough, the first one to nail it was the artist, Nobu Tamura, himself! Commenter A.G. came close, speculating that it was due to the orientation of the glenoid, but that has more to do with the range of motion of the upper arm and how far it could extend into a bird-like flapping position, rather than the way the wing folds up. Good job guys!