Well if no else is going to do a Going Pro ARTicle this year, I guess I'm going to have to :P

For my first Going Pro contribution I'm going to tie into my Flukes series of 2009 and 2010. While attempting to create a Shark Toothed Dolphin (Squalodon) for Dr. Ewan Fordyce (the tale of my efforts and MISTAKES can be followed in Part 1, Part 2, Part 3, and Part 4) I picked up a few very good tactics and attitudes for getting yourself, as an artist, established with a working scientist. In the last couple of months I've gotten myself some more legitimate Palaeo-art gigs using these approaches with other palaeontologists here in Canada.

So I figured why not try to help everyone else out with my methods for all you aspiring and upcoming palaeo-artists to break into the palaeo-reconstruction field...

PART: 5
Working with (and for) Palaeontologists

Before I dive into this article, I'm going to clarify that the point of this article is for you to get gigs reconstructing critters for palaeontologists.

This is a very different task than what we usually get up to here on ART Evolved. Most often we are attempting to reconstruct something by ourselves for our own purposes. While you can certainly ask a scientists for their input in these effort, this is not the same as working on a legitimate reconstruction in my opinion.

Now before you get all enraged, I am not down playing independent palaeo-art, nor am I trying to insult people who create it. Hopefully everyone on this site knows how much "non-legit" palaeo-art I've created! When I use the word legitimate here I am solely referring to the fact the palaeo-art in question was commissioned by a scientist to accompany a formal publication. This to me means the artwork carries a bit more weight by having an outside authority's seal of approval and thus has had its own form of peer review.

Now with that quick preamble out of the way, how do you get yourself working for a palaeontologist in this way?

I've found one's frame of mind toward palaeontology and their art that is the key to selling said art. To best illustrate this let me tell you a story...

Just a few months ago, I met for the first time a new palaeontologist (Dr. Potential I shall dub them). I was very interested in pitching myself as a possible artist for Dr. Potential should they need a reconstruction done in their area of expertise (a big interest of mine). While they were willing to meet with me, I was stressed when almost immediately into our introduction Dr. Potential became very withdrawn and almost confrontational. I thought I'd done something offensive by mistake, but I pressed on in my usual manner of selling myself and my art (humbly casual). The interview didn't improve. In fact I thought I was crashing and burning when we got to my portfolio, and I was unable to answer some rather pointed technical questions about my anatomy choices in my pieces. I thought that was the end of the meeting, and I braced for the "thank you but no thank" you". Taking me by surprise Dr. Potential told me they were interested in me working for them. What I thought, after all that hostility?!?

It turns out Dr. Potential had tried collaborating with two other amateur artists in the past, and neither those experiences had been positive for the good doctor. In both cases Dr. Potential found the artists approached the subject matters like they were the experts, and began questioning or ignoring Dr. P's input and requests due to their own "research" of the topic subject matter. In the end Dr. Potential aborted both collaborations, and had a somewhat lowered opinion of "palaeo-enthusiasts".

I won over Dr. Potential with my very laid back and open approach to both my palaeo-art and the science in general. More to the point Dr. P very much liked the way that while I was well informed on palaeo, I didn't have a need to "flaunt it" or pretend I knew as much (or more!) than Dr. P (as I do not!). So that is how I got the gig.


So my first very key piece of advice when approaching a scientist to create palaeo-art for them is to forget everything you think you know about palaeontology. Especially about the topic you will be creating.

I don't mean to harp on people, but this is very important as a palaeo-artist. It doesn't matter how many museums you've visited or papers you've read, the scientist is the expert in the case of a legit reconstruction. That is why they are the ones writing the paper. Approach them as such. Do this and I guarantee you'll have luck.

Besides you'd be surprised how much you can learn from talking to an expert (no matter how much or little reading you've done on their subject). Despite all the science that is out there in publication, I've always enjoyed direct conversations to learn about all that hasn't been published yet!


Your Price
While attitude is key, there is another sticking point I've encountered over my ten or so pitches. How much your art costs. How you answer can really effect your efforts to getting established.


I venture the suggestion, at least while you don't have any formal credentials or portfolio full of commissioned work, you think about doing your first few pieces for free...

Immediately I should caution, I am not aiming to make my entire living or even a significant portion of it doing palaeo-art. I would just like to see my hobby pay for itself, and maybe see myself advance to the contemporary big leagues of the artform. As of such my not making money on my first few legitimate palaeo-art pieces is not a big lose to me.

This has me as a diametric opposite camp from the real artists out there. As a good example of their point of view I will call on our AE comrade Glendon's stance on the pay issue (I've run this by Glendon for the record). He suggests not doing any work for free. If you do there is a risk it will set up an expectation in your clients of this being the norm, and might even establish you a reputation as a "freebie" artist. While I agree with this on its fundamentals, legitimate professional level palaeo-art is very cut throat. You might need an edge in your rookie gigs.

I've lost over half my initial pitches to already established professional palaeo-artists this year, particularly Dinosaur reconstructions, as they offer some pretty stiff competition. For starters they have established relationships within the field, have a tested true body of work, and have demonstrated they have the methods to capture what the scientists are after. Who am I to compete with that right now, one on one, unless I level the playing field? "Selling" myself as the cheaper (to free) alternative has really been my only way to slip into circulation. The compensation in this case is building up my portfolio with actual published credentials.

I personally have "lost" a couple potential gigs (initially I was signed on a the tentative artist due to being free) when the project got money for a press release. Rather than risk paying a no name unestablished talent such as myself, they go to the proven stars when money enters the equation.

The other way I justify not making money off this art is that at moment I am not making any money creating non-legitimate palaeo-art, how could not being paid to actually create legitimate stuff hurt anymore?

Working for free is just one strategy, and it has been working for me off and on this year. Take what you may from it. The payoff is I have a potential half dozen reconstructions in the works now (one possibly paying!). Of course I'm at the whim of marketing and communication departments for the majority of them, especially should money for a formal press kit come up with a project. So mine is not the most stable strategy. Mind you I'd venture there is no such thing in the palaeo-art game...

So what are the payoffs of doing your art for free while defaulting on all your prehistoric know how? Quite a few actually. Not only for your art but also your knowledge in the field of palaeontology.

Here are just some of the benefits I encountered working with Dr. Fordyce in New Zealand. 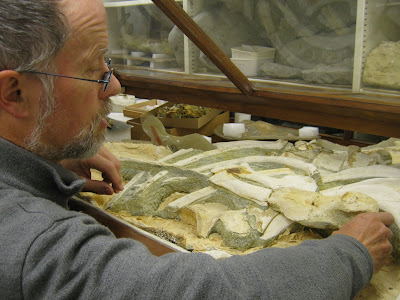 Access to totally brand new specimens. This one was huge. When working with scientists you often get a sneak preview of things no one else in the palaeo community has ever seen. While you typically aren't allowed to talk about them (at least if you want to keep your name good in the field) there is something extremely satisfying about getting to be one of the first to see a new prehistoric critter. Plus if you're really lucky you could find yourself to be the first person to ever reconstruct it! 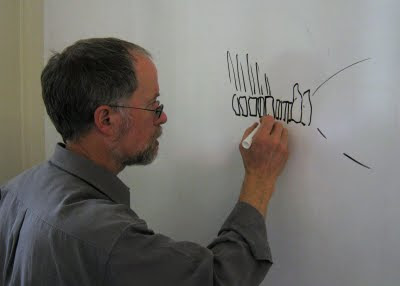 Access to most recent knowledge and research. For me often the hardest part of reconstructions is ensuring all the details are in line with the science. While one can read the technical literature, often very important things aren't covered on how these animals are put together or figuring out how to translate them into a concrete image. Additionally the amount of research can be a little much for a part time palaeo-artist such as myself.

When working with a palaeontologist often a lot of this guesswork (or outright conjecture) can be taken out of the picture. Every palaeontologist I've talked to is sitting on some knowledge of these details, either not published yet or that they know of from obscure references you don't know about (they are paid to know this stuff). Working with them, you'll find suddenly your work can become the cutting edge reconstruction of the critter in question by including things previous reconstructions lacked! 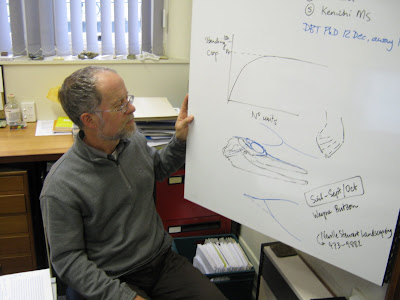 You'll become a part of the research process. One of the other cool byproducts of working with a palaeontologist on a reconstruction is that your seeking as much information about a fossil as a living animal can spur new insights or areas of inquiry about them.

While working with Dr. Fordyce, a quick question I had about the placement about fins on the Shark Toothed Dolphin suddenly caused him to consider every other reconstruction of these animals previously made. He realized based on his own recent work on dissecting modern Dolphins that all previous reconstructions (and even most museum mounts of Dolphin skeletons both fossil AND modern) were wrong in the angle they were placing the ribs. Meaning not only was my reconstruction going to be the first to represent this cutting edge idea, but that I'd accidentally spurred it into entering the equation. 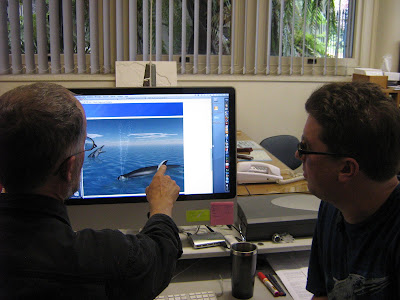 Direct feedback and input. The most rewarding and unique result of collaborating with a scientist is getting a qualified opinion on your reconstruction. While there is nothing wrong with feedback from palaeo people like those here on ART Evolved (seriously love you guys for it all!), this doesn't quite compare to getting it from one of the top minds on the subject. Especially when you finally nail the critter, and get the experts seal of approval!!!

So I hope this random ramble is of some use to you. While I'm by no means a professional or big name in the field of palaeo-art, using these steps I've definitely made headway to at least breaking into the scene later this year. I hope that one day you'll have the same luck as me!

Posted by traumador at 6:29 AM