I "love" looking for work, and it has been going so "well". The one bright side is that I've had time in between failed applications to do some art! As today was a particularly pronounced day of lulls (between 3 rejections! a new record!!!), I decided rather than just revamping models, I'd build a scene with one of them. 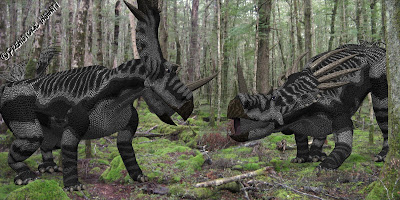 Ta-da! I give you my new version of my male Styracosaurs. You can see a bigger version here (as blogger is still not letting pictures I upload enlargen! Anyone know how to fix this problem?)

I'm looking for some serious feedback from you Ceratopsian experts out there. I spent some major time reworking the skull in particular. What else needs anatomical tweaking?

Posted by traumador at 5:46 PM