As promised here is one of the many palaeo-art related gems I encountered on my Chinese expedition. I thought I'd start on a light hearted and more comedic entry, and the Beijing Natural History Museum's Dinosaur Park fits that bill perfectly.

Overall the Natural History Museum in its public halls and galleries is a fantastic kids museum, and is a lot of fun. The quality of the casts in the skeleton hall are not of a good enough grade to satisfy a hardcore technical palaeo-nut, would be my only warning. I frankly loved it, and it held up a good hour long visit (as the signs were all in Chinese, and my wife wanted to push on our day this was all I could afford, but it was just the right amount I'd say unless you can read characters).

In the basement of the museum though is a series of three themed rooms filled with the most fun and silly Dinosaur display I've seen in a while. I'll let the pictures tell most of the story, but in a nutshell what I loved about all the models you are about to see is that none of them were robots. All of them were giant static statues, that felt more like giant action figures from my childhood than something that should be in a museum. That's exactly what they were in a sense, copies of the bad dollar store Dinosaurs we 80 kids all used to get. I suspect the sculptors were provided such toys directly from the factories that produced those toys as their references (I could be wrong, but that's what they felt like).

David Hone covered two of the highlights of this display here and here, but upon visiting I found several more that I had to share.

﻿﻿﻿
The only technically correct thing about the exhibit was this nice welcoming sign.
(Blogger's photo captioning suddenly won't work for me here, so all these sculptors are credited to their unknown artist, and as usual please let me know should you happen to know who their creator was) 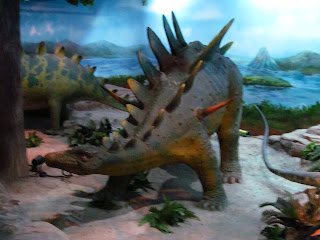 I totally owned a small version of this guy! Apart from being a 100 times larger and badly painted this was a weird flash of nostalgia for me... 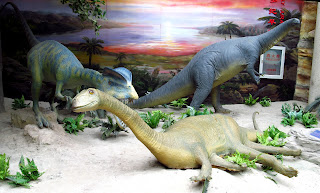 This has to be the happiest victim herbivorous ﻿Dinosaur in the history of victim plant eaters. 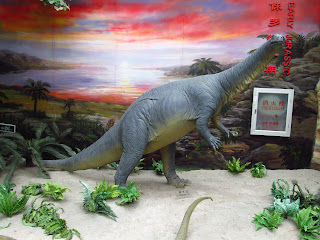 This guy feels like he is out of an old skool painting. 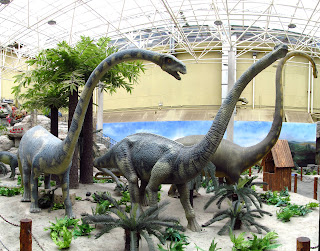 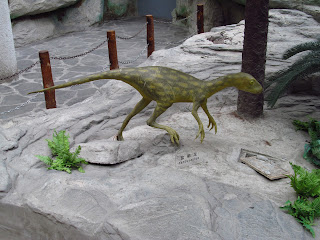 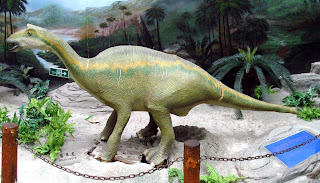 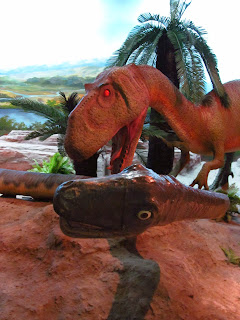 This combo had to be the single best highlight of the whole "Park". The demonic theropod about to chow down on a cartoon smiling Sauropod.

Posted by traumador at 8:23 AM