Judging a book by its cover...

Over on Archosaur Musings Dr. Dave Hone just reviewed the 2nd edition of The Complete Dinosaur. In the comment section an interesting an exchange between Dr. Hone and SVPOW's Dr. Mike Taylor caught my interest.

Dr. Taylor's voiced his dislike of the book's cover due to the art being "cartoonish" in his opinion, and Dr. Hone disagreed with him on. I'll quote the whole thing in a moment, but here is the cover for your contemplation first. Pay attention to your reaction to it. Does this strike you as "professional" level art or something else...
Here is the exact discussion (keeping in mind they are friends and this was in a joking tone)...
﻿

Mike Taylor- It’s a real shame that the 2nd edition, like the 1st, has a cartoon cover. When I started to be seriously interested in palaeo, I passed over the original TCD because it didn’t look like a serious work. When I finally read it a couple of years later, I realised what I’d been missing — probably the single most useful book I could have read at that stage. I hope the new cover doesn’t lead too many others into making the same mistake.

Dave Hone- I don’t think it’s a cartoon Mike. It’s a proper piece of dinosaur art, and certainly no less ‘serious’ than a great many dinosaur book (The Dinosauria has something not too dissimilar). A simple flick through should make it obvious about the content too given all the references and technical figures..

Come on. this is a cartoon.

Nope, I just disagree. I really don’t think it is.

Well, then our profound debate seems to be at an end.
Unless a third party would like to break the tie?

Well it is simply a matter of opinion/ taste. Though to continue just a little Mike, in your original comment you do rather imply that you judged the book by it’s cover. I can’t help feeling that phrase rings a bell somehow…

A few "third parties" ended up weighing in, myself among them. The final verdict on whether this piece was "good" or not is not really important, as Dr. Hone accurately pointed out it is more a matter of taste and opinion. What interested me was the issue Dr. Taylor touches on. How stylization of palaeo-art can affect people's opinion of it (and in this case the book it is attached too).

Overall the composition of this cover art is pretty standard and, apart from perhaps some thickness issues with the Diabloceratops forelimbs, isn't a bad reconstruction. What Dr. Taylor is mostly picking up on is the colour palette choice by the artist. Every colour is bright and vivid, giving it the "cartoony" appearance. 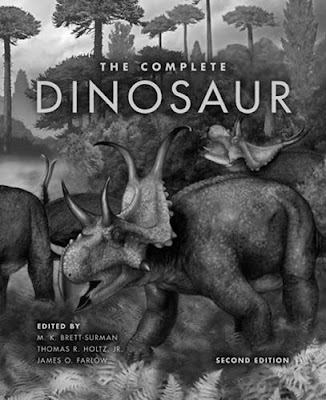 When you take the colour away there is nothing cartoonish or simplistic about this drawing. With colour though I do agree that the palette choices give this piece a surreal and unrealistic appearance.

Whether this is good or bad is up to you. It can be said safely to not be photo realistic.

Does this sort of stylization hurt you or your pieces credibility though?

Obviously if you were trying to impress someone like Dr. Taylor it would.

Yet I know many scientists who currently don't hold an opinion like Dr. Taylor. Dr. Hone obviously being one of them. In addition to him, I know of at least three more that in the past year approached me for possible book covers due to my own stylized work.

I personally was floored when they approached me, and I wonder if the Complete Dinosaur artist had a similar request for this book. In my world if you are a palaeontologist seeking a book cover you'd ask for some of the very best palaeo-art from the top names.

It turns out for years this is exactly what authors have been doing. In the rough words of one of my potential clients "Sure we could go for a more conservative and 'realistic' piece by say Micheal Skrepnick or Julius Csotonyi, but everyone has those these days. You're book just blends into the crowd that way. Lately we've been going for artists and pieces with some character and quirkiness to make our books stand out."

I'm not complaining about this trend in any case myself :P However I found Dr. Taylor's reaction to such a quirky piece very interesting. It certainly attracted his attention, but not in a good way. That said I think I see what my clients are thinking this (and I suspect this book's team were thinking as well). Any attention is good.

In looking through my own books I find that Micheal Skrepnick can be found on nearly 1/3 of all the covers. I certainly adore his art, and I personally was noting how he is the king of modern palaeo-book covers, but from the individual book's point of view this could be a bad thing. I do find when I'm, too rarely, presented with a bookstore self with a wide selection of Dinosaur volumes the Skrepnick covered books don't leap out at me. I have to read the titles and blurbs to be attracted. (Sadly I can only think of three bookstores where I can cite this "test", two were in museums and one a university bookstore... if only it were more common).

I can only speculate on whether the Complete Dinosaur's cover was chosen for this reason or not, but I have suspicions.

Does this covers unusual colour scheme catch your attention? What is your reaction to it? Overall do you judge or pick your palaeo-books in any part due to their covers?
Posted by traumador at 2:40 AM