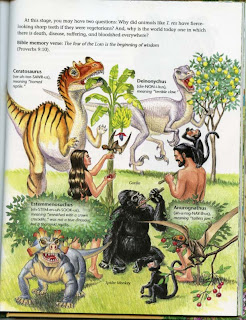 The gorilla's teeth represent a high-water mark. Natural history illustration will be feeling that blow for some time to come. Illustration by Earle and Bonnie Snellenberger, copyright 2001 by Ken Ham, from Dinosaurs Of Eden.

Oh, and the lemons? It's not stated specifically, but my guess is that in Eden, lemons were sweet. Which suggests that Ham believes that quinces were likewise edible -- but what do you suppose his position on pine cones is? I'll bet it's something surprising!