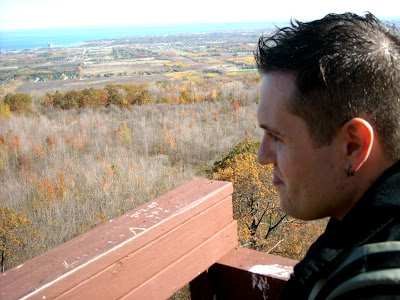 Professional Art + Illustration
Since The Flying Trilobite's inception in March 2007, I have found support and resonance from the science, secular and artist communities online. I continue to be available for freelance art and illustration. My work has been featured on numerous blogs in the past couple of years as examples of the intersection of art and science. I have also been a speaker and given interviews about my work and ind the intersection of art + science. 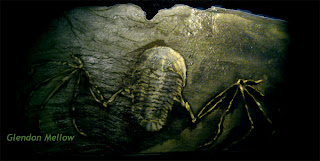 Artist's Statement
With my drawings and paintings, I seek to increase our metaphorical vocabulary using the discoveries of science, particularly biology and palaeontology. The genius of representational painting, epitomized by the Renaissance masters, the Symbolists and a handful of Surrealists has never had a more apt time for inspiring wonder in humanity than during our modern scientific age.

Why use Odin to portray wisdom when I can paint Darwin?

Why paint flowers when the beauty of the structure and oxygen produced by diatoms is so compelling?

Regard the resilient stony success of the legions of trilobite species waiting in the rocks.

I can stand here, separated by 550 million years and look at this long dead animal and understand some things about it. I can imagine adventures for it. The absurdity of unimaginable time, and my eyes and hands crafting an image of a fossil still make me shake my head in wonder.

I have an Honours Bachelor of Fine Art from York University, majoring in art history, drawing and oil painting. The Symbolist era of fin-de-siecle Europe inspires much of the aesthetic of my work. The urgency of Symbolist artists such as Fernand Khnopff, Odilon Redon, Arnold Böcklin, as well as the Surrealist Frida Kahlo, appeals to the dark lens through which we see the world, complete with scattered fragments of hope. The imagination found in faery artists like Arthur Rackham, and current illustrator Alan Lee are delightful, and shaped much of the themes of my early work. 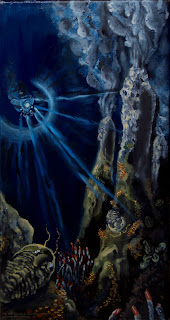 Timeline of work:
In the fall of 2010, I will be switching careers to concentrate full-time on illustration and fine art work.

June 2010, I graduated with my Bachelor of Fine Arts, Honours from York University. I have majored in Studio and Art History.

May 2010, I completed an original painting, The Last Refuge, for Deep Sea News blogger Kevin Zelnio.

May 2010, scienceblogger Scicurious of Neurotopia unveiled the caffeine-molecule tattoo I designed for her.

In April 2010, I became the webmaster for the Southern Ontario Nature & Science Illustrators (SONSI) group.

In March 2010, New Scientist magazine's online blog, CultureLab: where books, art and science collide included an interview about my artwork.

March 2010, I was invited to be a speaker and panelist at the Centre for Inquiry Ontario's Educational Conference, entitled, “Art & Science: Freethought at the Intersections of Two Worlds”.

January 2010, I attended ScienceOnline2010 and was involved in two sessions. I led aworkshop introducing the versatility of digital tablets and the program Gimp. Also, with session co-leader Felice Frankel, we discussed our topic, Push it 'til it breaks: what are the limitations of visual metaphors?
An interview and 4 illustrations appeared in the new coffee table book, Geology in Art: an unorthodox path from visual arts to music for geologist and trace fossil artist Andrea Baucon for his. You may preview the entire book at the link.

Beginning in the fall of 2009, I began a series entitled Going Pro at the group paleo-art blogArt Evolved. My aim is to discuss with new illustrators some of the lessons I have learned so far in my career.

Published in Fall 2009, my illustration of an Ent from can be seen in issue #48 of Mallorn, the journal of the Tolkien Literary Society.

The group paleo-art blog to which I belong, Art Evolved, was featured in a two-page spread in the September 2009 issue of EARTH Magazine, the publication of the the American Geological Institute. The issue included my Mythical Flying Trilobite Fossil III as one of four illustrations from the Art Evolved members.

The Flying Trilobite was included in an article entitled Blogging Evolution by Adam Goldstein for the journal Evolution: Education and Outreach as an example of "imaginative" blogs about evolution. Other blogs featured on the list od evolution-education included Pharyngula, Why Evolution is True, The Loom, The Beagle Project, and many more excellent blogs.

In May 2009 I completed a blog banner commission for Migrations, a blog about science, society conservation and migration patterns.

Also in May 2009, I took part in SciBarCamp Toronto and moderated a session entitled, "Can art benefit science?"

The popular Darwin Took Steps is now appearing on a book of science philosophy, entitled La Mente di Darwin, ("The Mind of Darwin") by Andrea Parravicini, and published by Negretto Editore of Milan. 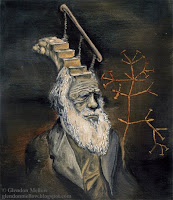 In early 2009, my Darwin Took Steps image was seen on the cover of Secular Nation magazine, and I was interviewed in a podcast about it. This image has been quite popular, and was included as part of my contribution to the cover of an annual science blogging anthology Open Laboratory 2008, and again on the 2009 edition. I also have donated a portion of the sales of t-shirts, cards and prints of the image to The Beagle Project.

In January 2009, I attended Science Online '09 in North Carolina, U.S.A. In the unconference format, I moderated a session about Art & Science, and co-moderated an online-image workshop with artist-biologist Tanja Sova.

In November 2008, I produced a poster for PZ Myers' Toronto lecture, hosted in part by The Center for Inquiry Ontario.

Summer 2008, I completed a blog banner for The Meming of Life , a secular parenting blog.

In March 2008, I was commissioned to produce a new blog banner for the Scienceblog, Of Two Minds. I had previously been commissioned in September 2007 by one of the blog authors for a banner for Retrospectacle.

In May 2007, I discussed with Virginia Hughes how unreal trilobites with insect or bat wings have been a part of my work for over 12 years now and I have painted some of them on pieces of shale, as in this interview on Page 3.14.

I was born under a cabbage leaf in the summer of 1974, covered in stork feathers and placenta. I’m inspired by evolution and biology to create my paintings. I’m particularly fond of Naples Yellow. Delicious looking colour, and not healthy at all.

I live in Toronto, Ontario, Canada with my wife Michelle and our hermit crab Shiny and school of neon tetras collectively known as Roger. We hang a lot with our awesome nephew every week. I love to sketch at the Royal Ontario Museum. In 2008, I had one of my Mythical Flying Trilobite Fossils tattooed on my arm. 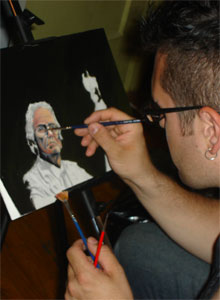 Feedback and commissions keep me going!

- - - - - - - -
Original artwork on The Flying Trilobite Copyright to Glendon Mellow

Posted by Glendon Mellow at 4:57 AM