Here is the post celebrating the passing of ART Evolved's fourth year in existence. Technically this post is a couple weeks late (and it was just 4 years and one month ago the behind the scenes stuff occurred to get this site off the ground).

A lot has happened here and in the great palaeo-blogging sphere over this time. The past 1.5-2 years in particular have been quite different in palaeo-blogging, and I'd argue there has been something of an extinction event going on in palaeo-blogging. Not a catastrophic end type extinction, but certainly a marked and noticeable one. The number of causal palaeo blogs have dropped, and the community has moved onto other online venues. Online palaeo is by no means extinct, but its blogging lineage (at least for now) appears to have had its glory day.

So that leaves myself and Peter in an interesting position. This blog was launched those four long eventful years ago with the idea of being a central community hub for online palaeo artists to gather and collect events, thoughts, and happenings in the field in one place. While it certainly has been no failure, and done far better than either of us thought it would, ART Evolved never really developed into what we'd imagined it to be either.

Don't get me wrong I've been quite ecstatic with the site, and I hope it still has a long prosperous future ahead of it. However things have certainly changed in blogging. More to the point things have also changed in both the lives of Peter and myself. We are not the young free time blessed substitute teachers we once were. Full time jobs and other life commitments find us with far less time for this site than we once had.

Which is why we've had to really consider on this anniversary the future of the crown jewels of ART Evolved. The thing one we're both the most proud of in our blogging careers. The galleries of life...

With the down turn in blogging the past year plus, there has been a down turn overall in the galleries entrants, and a down turn in the overall impact these galleries have had in the field. Don't get me wrong, we certainly have had many very talented and exceptional entries in even the past few galleries (and my many thanks to those who have still been submitting art!). However it is safe to say the galleries are just not as big of  an event, draw, and/or focus of the online palaeo-art community they once were.

So rather than let them struggle themselves into complete failure (especially given me and Peter's continued inability to give them the time and attention they deserve), we have decided to (at least for the foreseeable future) to bring them to a conclusion on this the 4th anniversary of ART Evolved.

Now I'm not saying we're ending it right this moment. No, no, no my friends. We've decided to end the galleries of life on as big a note (hopefully) as possible. We'd been planning on saving this gallery topic for the 5th anniversary of the site, but what's the harm in unleashing it a year early?

To celebrate the 4 year long ongoing collection of great new palaeo-art by our many, many, many amazing, awesome, and really appreciated contributors and artists we give you the finale gallery of ART Evolved... 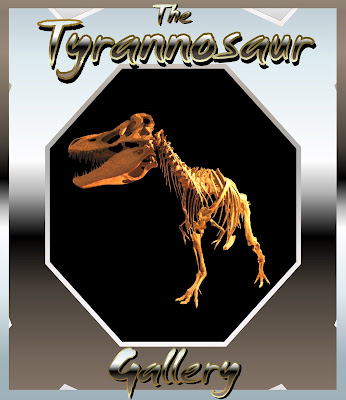 So please get started on your Tyrant lizards. We are aiming this gallery for a June 1st launch.

Please spread the word, as again this is hoped to be a fun event to celebrate, and yet mark the end of, this long running online palaeo-art tradition! The dreamed for goal, though obviously it is just hoped for, would be an entry from ALL our past galleries participants.

Of course with this announcement, please don't mistaken this as the end of ART Evolved.

We will be remaining up and running.

We will still happily post the palaeo-art of anyone and everyone who submits it to us. We just won't be organizing the big themed events anymore.

Who knows, if demand returns, the galleries could return as well. However for the immediate future, we thought end on a bang while the going was still good.

So please consider joining us for one last go at creating a gallery of new and fantastic palaeo-art.

One way or the other, to all our past gallery participates a very heart felt thank you from me and Peter. You've given us one heck of a fun ride, and we've made some great virtual friends through the process.

Thank you again everyone who has helped make this site what it is today!

Craig
Posted by traumador at 6:56 PM