It was the best of times and the worst of times...

This post is my attempt at trying to deal with the 3 month palaeo-art apathy/depression I've been suffering from. I'm inspired (as usual) by Glendon Mellow's recent post on overcoming his own artistic depression. I'm hoping by articulating the situation I might better attack this current mental state. For any of my "fans" out there (which I don't currently feel like I have many of) take this as your call for a minor moral intervention.

My piece of the Goronyosaur tearing a Globidens pup to shreds accurately represents my drive and attitude towards my palaeo-art at moment. I'm the pup, and the Goronyosaur is a combination of apathy and doubt about my work.

The really weird thing is 2012 up until October was my most productive and positive year out of my "career"...

I completed some 24 portfolio-able pieces (at the time I felt 10 were pushing my abilities to new levels). I modelled and textured over 16 new models. 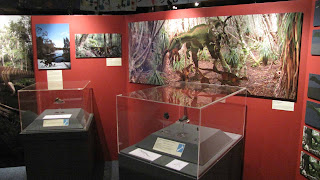 Even bigger than that I finally got my work into two museums!
With all this why could I possibly be down on myself and my palaeo-art?

Seriously this is a legitimate question. I don't know why exactly. If you have any experience with this sort of thing and have an insight please do share it.

There are a few possible contributing factors. The thing is when I think about them they don't bother me on a conscious level. I've never typically been the sort to have subconscious emotions as it were. I can always trace my state of happiness or lack thereof to clear cut cause and effects. Yet with my palaeo-art I'm completely in the toilet emotionally.

One of the big things to change in latter 2012 has been work. My second year at my school has been a lot more difficult. My new classes' parents are very difficult, my co-partner situation is an absolute nightmare (she doesn't speak English, yet we're supposed to be a functional communicating team...).

Despite this I've managed art. I've dived into making stuff for my board game addiction, and I've been just as productive there.

The only thing I can think of that did me in specifically, was the latest negative interactions with palaeontologists I had in this fall. Which is sad. Overall all the palaeontologists I've met and dealt with are brilliant people... Until it comes to my art.

The biggest misadventure was the feathered Ornithomimus from Alberta. In early 2010 I was pseudo approached by a member of that research team about my art. Not specifically the Ornithomimid granted, but just my art in general. In talking about it they were very interested, and I suggested I could help out with the Ornithomimus. At that time they were somewhat interested, as they hadn't looked into a reconstruction yet. However as time went on (the publication of this animal was some 2-3 years later than I think the team would have liked) communications from this scientists dwindled and dwindled. My last official word on the topic was in 2011 just before I left for HK, and it was they were thinking of engaging Julius Csotonyi to do the reconstruction.

This wasn't actually a problem. I understood the instant they brought this choice it was the only logical move on their part. For a specimen of this importance (although the extra time it took them seems to have taken the impact off the first feathered Dino from North America, in face of all the other feathered stuff that came to light in those extra two years) they'd want a super star palaeo-artist. It was more the fact I NEVER heard back from them after this point. I simply wanted an official confirmation I wasn't needed anymore.

Honestly I'd accepted I wasn't going to get that gig back 2011. However finding out they had definitely gone with Csotonyi from news releases and blog posts, rather than the person I'd gone to the effort of volunteering many hours of my time to, kind of hurt. All I wanted was confirmation I wasn't going to get to do it.

I also had another two researchers outright reject offers for free art for their press releases, and they instead opted for nothing. Which has left me with a lingering feeling my stuff is shit...

The logic in me says that the museum gigs (one instigated by an active palaeontologist) should make this a zero sum situation.


So on the one hand I'm left vaguely with a confusion as to whether my stuff is crap or not... Some people want it in their museum, but others don't want it (for free) with their press release.


The sad part is with the release of All Yesterdays, there is a new palaeo-art movement I was already trying to get into, before it was out there and "cool". This Stegosaur, while an amusing mistake, was the direction I was going in as of September.

However given I didn't finish this guy before the book's release, it now feels like I'm riding the book's coat tails. Which while vain of me, I'd liked to have gotten out there and said I thought of this on my own. Now it'll just look like I'm doing this just to be in on the book's new "trend".

I'd really like to get back to palaeo-art. I just can't get over my creative funk.

Anyone know the feeling. More important if you know it, do you know how to kill it?
Posted by traumador at 6:58 AM