Cretaceous Studies is stealing art, help us ID their victims.

So through some dumb luck, and blatant arrogance on the part of the thief (by directly boasting they have been stealing art), we here at ART Evolved were handed a pretty clear cut case of a Dinosaur "comedy" site that has been taking other people's photographs and artwork without crediting them or asking their permission (that alone compensating them) and thinking this is totally acceptable! The case broke here, and I found one of my own photographs taken here. I thought I'd setup a central post about the whole situation...

Here is a quick recap if you're just tuning in. ART Evolved recieved an email invitation to check out and plug the "Center for Cretaceous Studies" website (link included below). However they opened with the line, which we can only presume they thought was a joke, "[a]bout the only 'art' our websites have is stolen or 'not quite legally borrowed' as our lawyers tend to say". They really didn't do any research into their target audience here on ART Evolved apparently, as one thing we do not think is funny is art theft!

This led to a quick check of the site where I found indeed Cretaceous Studies was using several other artist's work, not to mention one of my very own photographs. As I'd never heard of the Cretaceous Studies Center before, but yet there was my photo, I could confirm they had not been obtaining permissions for these images. What broke my patience was they weren't even giving basic credit or backlinks to people whose original content they were using as the basis of all "their" content.  I contacted another artist whose work was on the site and he verified they didn't have his permission either.

Why am I going on the warpath? While the use of my photo left me less than impressed, in reality I'll be the first to admit it's not particularly amazing. Rather I'm very annoyed at Cretaceous Studies for their sarcastic attitude towards the subject of content theft. None of this "their" content would exist if not for the original creators they lifted images from. It'd be one thing if they didn't make light of this fact, but to outright boast/joke about it is totally unacceptable! Furthermore they have ads on their site, meaning that any traffic they get due to this "borrowed" content could be giving them money. When you really look at 95-98% of Cretaceous Studies' pictures they are based on other people's work. It doesn't seem right Cretaceous Studies should get 100% the profit from their ads...

I've gone through all their images and collected all those that contained artwork. I assure you that everything else on their site (which I haven't grabbed) used photographs of statues and animatronic robots or stills from Jurassic Park and Walking with Dinosaurs. As identifying these photographs strikes me as a long shot (and the movie stills are a problem for studio lawyers), I am only targeting the clear artwork violations.

I am in the process of contacting all artists whose work has been taken. So far the one artist I have gotten in touch with has managed to get the picture successful taken down in the past 24 hours (I didn't come across it today while collecting these others in any case). So let's try to increase this stat!
To show the Cretaceous Studies people how you're supposed to post pictures, all works you are about to see are from the Center for Cretaceous Studies site.

I have not asked Cretaceous Studies' permission to repost these though, as all these pictures contain components belonging to other people that were uncredited and thus implying they were posted in the first place with no permission (and DO I have two confirmed cases where there were no permissions given) thus they have no right to require me to need permission. While I do not have these original artists' permission either, I am crediting these artists as I find out who they are, and I am more than happy to remove these images if asked to do so! I do credit Cretaceous Studies with photoshopping the elements together, but that is the only acknowledgement I will give them without further crediting or explanation on how these pictures came to be.

If you spot any artwork or photos for which you know the owner or creator that I haven't identified please let us know in the comment section of this post or email us at artevolved@gmail.com. 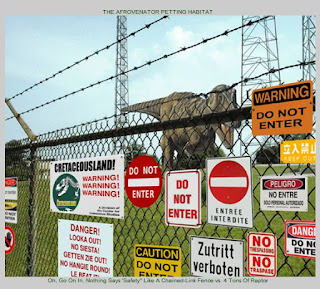 That Tarbosaurus belongs to Raul Martin, and I am in the process of contacting him about its misuse . 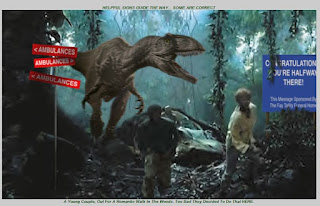 This is a decrested version of Joe Tucciarone's Cryolophosaurus. I am in the process of contacting him. 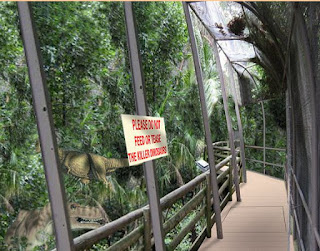 A big violator, that involves four people including myself. Photograph by Craig Dylke. The upper Tyrannosaur is by Joe Tucciarone and the lower (slightly modified) Albertosaurus is by Jeff Poling and Chris Srnka. I am in the process of contacting them all now... 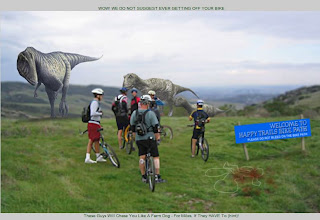 UPDATE: Thanks to Julio Lacerda we have identified the Carcharodontosaur on the left as that by Gerhard Boeggemann. It should also be noted that the Dinosaur in the middle is simply a still of an Allosaur from one of the BBC's Walking with Dinosaurs programs. 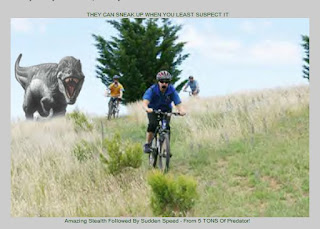 UPDATE: None other than THE Willam Stout was able to identify that Tyrannosaur as belonging to John Sibbick 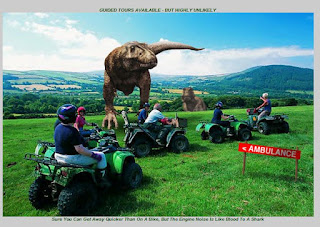 UPDATE: JD-man was also kind enough to find that the top Gorgosaurus in this picture is by Sergey Krasovskiy. The bottom Gorgosaurus was lifted from National Geographic's Sea Monsters movie's website. 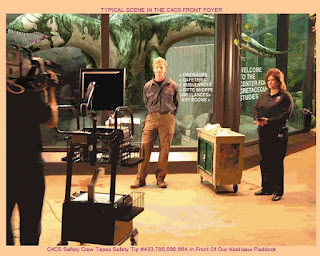 UPDATE: Thanks to Tuomas Koivurinne we now know the recolored Abelisaurus in the background is by Shiraishi Mineo.

Please if you know the artist behind any of the Dinosaurs (or for that matter photographer of any of the plates) below!

UPDATE: Thanks to our readers and friends many previously unidentified pieces have now been recognized, so there are now gaps in the lettering scheme. This is a great thing, and we hope soon to have no letters left at all!!! 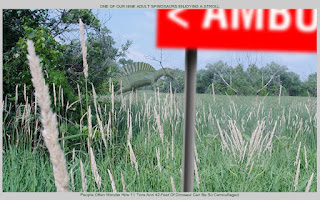 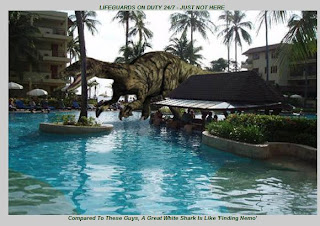 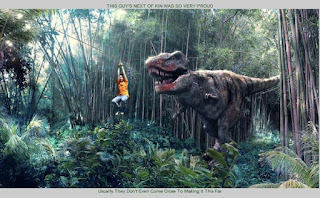 
So if you recognize any of the Dinosaurs or photographs in any of the above images please contact us and/or the affected artist.

We also ask you consider boycotting the Center for Cretaceous Studies site until they either change their stance and practice on art theft (in which they contact artists and photographers to get permission to use and alter their work and/or properly credit and back link to the real content creators) OR they remove all the images which contain unauthorized image components (which frankly is nearly 95% of their sites pictures).

I'll be posting updates and original image credits on this "case" as they come in.
Posted by traumador at 7:20 AM