While discussing Andrea Cau's 10 commandments, in particular palaeo-art myths and memes, Andrea and myself made some points I wanted to bring out of the comment section.

Originally Andrea had been referring to palaeo-art memes as myths, and technically there is nothing wrong with that. The term meme is not necessarily universal (though it is certainly growing in popularity). "Palaeo-art meme"s were coined by Darren Naish as best I can tell (here, here, and here). I on the other hand had been calling them palaeo-art "type specimens" before that. So Andrea Cau calling them palaeo-art myths makes perfect sense. I'm sure there are a few other terms describing this same sort of palaeo-art practice. 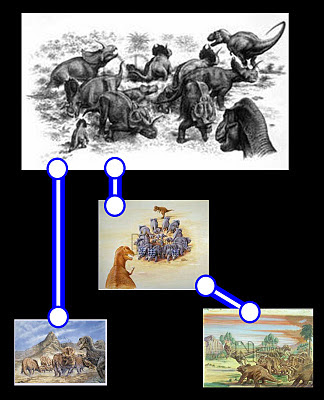 Palaeo-art memes are the artistic phenomenon where one original artist creates their own version of something prehistoric. Other subsequent artists, due to a lack of other references (or just outright laziness) copy concepts or components of that first piece as though it was a direct source. Suddenly the prehistoric subject is always recreated just like that first artwork, whether that first artist was (or still is) correct or not. These memes can lead to errors in science understanding, communication, and education so they are important for all palaeo-enthusiasts to be aware of.

(Meme being a term coined by Richard Dawkins to describe how humanity had evolved a new form of self replicating, mutating, and reproducing information like genetics that was not restricted by biologic processes or forms. In other words ideas and information. Gene for genetic information and meme for human informational units)

However Andrea's name of palaeo-art myths struck me as a great name for a related concept. To me all palaeo-art (besides direct skeletal reconstructions) are a form of scientific mythology. Myths have always been a way for humans to answer key questions about the universe around them with stories. Science does an amazing job of explaining the universe, but can lack in the story telling department.

When we are bringing back creatures and worlds that were never witnessed by humans, there is a bit of a mythology in how we recreate them. Not made up mind you, but scientifically influenced story telling (the amount of science can vary on a piece to piece basis of course).

To me any piece of palaeo-art no matter how plausible or implausible, so long as it has some scientific basis serves scientific story telling purpose. Whether it gets us thinking about what we know or do not know, it is helping the science. So to me this mythology is not only inescapable but an important part of palaeo-art. Without it we'd only be recreating only skeletons.

The danger is when a myth is repeated without scientific basis. Any idea once is harmless. It opens dialogue and questions. An idea repeated risks mimicking fact through repetition. Hear or see something enough and you begin to believe it. With prehistoric creatures this can result in animals gaining appearances or behaviours that we have no evidence for of or worse disproved through fossils and research.

I give you a brief case example. The myth of the Ceratopsian Defense Circle, and how it has spun out of control into a full blown meme. It is so strong I've had kids try and argue with me about it while working at the Tyrrell. 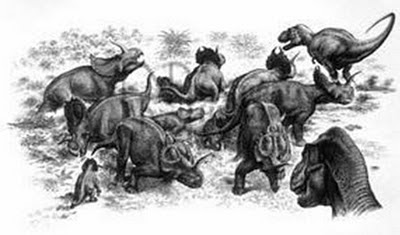 I've grabbed this picture from here, but it is by John Sibbick

I'm next to certain the whole meme of Ceratopsians forming circles around their young to protect them started with a piece by John Sibbick. I have fond childhood memories of this one picture above from my copy of David Norman's Illustrated Dinosaur Encyclopedia. However Peter Bond and myself both think we can recall a similar circle piece featuring Triceratops in colour by Sibbick appearing in the Zoo Book series as well. Which ever came first given Mr. Sibbick's credentials in Palaeo-art not to mention the quality of the piece I'm pretty sure this myth started with him.

As a single idea Ceratopsians having a behaviour similar to a modern Muskox is actually quite reasonable. When Mr. Sibbick penned this piece in the 80's there was still a PR fight going on to champion Dinosaurs as social animals. This piece fits right into that philosophy.

Even today there is nothing outright disproving this behavioural hypothesis. There is though strong evidence implying this scene is improbable. The bonebeds of Centrosaurus that inspired Mr. Sibbick above, are being found in modern taphonomic studies to have been formed from the remains of herds hundreds if not thousands of individuals strong. Meaning that this small number of animals able to form a perfect small circle was not likely the norm. More so to me a group of thousands of animals probably would be more than able to ward off aggressive predators by threatening a stampede.

So while there is nothing wrong with presenting this idea in an artwork or two, there is certainly no reason for it to become a staple of Ceratopsian reconstructions. There has never been any evidence for it, and a slight amount of contradicting evidence in fact.

Mr. Sibbick did nothing wrong at all, and in fact did a service for getting us to think about possible specific behaviours in Ceratopsians. Sadly someone else unable to think or their own idea or worse deciding to just copy Mr. Sibbick gave this myth a life as a pseudo-fact... 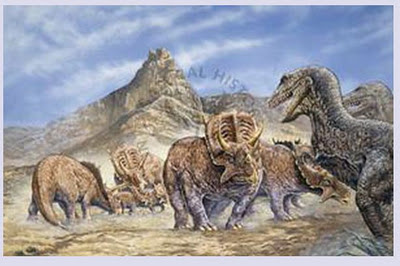 I'm not claiming this particular piece above is the first particular copy. I have no idea when or where most of my following examples come from. I've ordered them based on my judgement of their quality or accuracy (so arbitrarily).

As you can see the quality drops significantly from the "original" Sibbick and these imitators. This is a big part of memes, they don't just copy the first (typically superior) piece but each other too. Meaning that if one of the meme pieces had gross inaccuracies others can magnify this issue when they copy the copy. 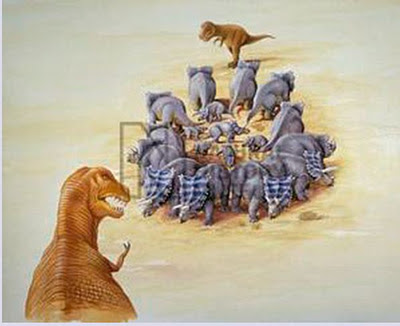 There are more than one type of artist who can become part of a meme. It typically depends on the subject they are creating.

For obscure prehistoric critters (typically non-dinosaurs) often there are only a few pictures out there. Most artists tend to have limited access to technical literature, and so research on obscure critters is very difficult. Even with literature many of us don't have the technical knowledge to translate the text into a visual. I personally find only half of papers have the types of photographs or diagrams useful to me in reconstructing the whole animal. Often then artists will look to any other restoration they can find as their references. Meaning these original source artworks become the template for that animal...

I consider these memes less negative. The intentions are noble, but the methodology could use work. Hopefully once we get the Palaeo-art Database up and running in the new year a solution to these problems will be found.


However in the cases around more popular animals we often see more lazy motivations. Though not always on the part of artists.


Publishers often are the main source of the worst palaeo-art memes. Kids picture books in particular are a ripe breeding ground for such recycling. Who exactly is to blame? It could be the editor, author, and/or artist, and who exactly probably varies on a case to case basis.


This sort of memeing is due to new books only referencing other similar kids books as source material. Not just the art either, often the text and ideas are reused kids book to kids book as well mutating with each incarnation. While I sympathize with those who meme with less common prehistoric critters, there really is no excuse with Dinosaur anymore. There are many great books out there written by professional palaeontologists full of update approachable information. If you must rip off someone at least make sure it is someone who knows what they're talking about (though really just go out and buy your kids Thomas Holtz's Dinosaur Up-to-Date Encyclopedia and put the big publishers Dinosaur books out of business :P).

So the take home message from all this.

If you want to create Palaeontologic mythology with a unique, whacky, creative piece do it. There is no harm in any idea once!

However if you want to recreate or copy an idea from someone else's palaeo-art, please do some research to see if the aspect you wish to emulate is based on science. While the first idea was fine in and of itself, if you add additional artistic "evidence" to an idea, it can take off like the Ceratopsian defensive circles and cause people to get the wrong message about the animal your recreating and the science of palaeontology.

The point of art is to be original and creative. Make sure that is what you are doing with you palaeo-art!

Posted by traumador at 1:56 AM