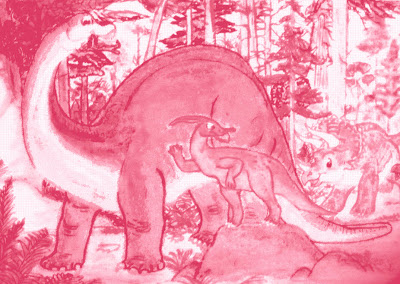 La DinoVie en Rosa by Dinorider d'Andoandor
I created these creatures for comic strips I used to draw as a kid. I invented these dinos in 1991/1992. You probably may wonder what on earth a Parasaurolophus, an Apatosaurus and a Triceratops are doing together, well I drew those strips for about 13 years, and in that span of time they became a herd and were brought into the present day among other things. That was before Jurassic Park so no DNA stuff was on the script!

I made the original picture in 2000, I just took a picture of it and changed the colors using Adobe WhiteRabbit.  I used a mixture of marker pens, colors, crayons, pastels, etc.
_
A big thank you to Dinorider for promoting Pink Dinosaurs on his blog El Pensieve de Dinorider here!
Learn more about the Pink Dinosaur Cancer Fundraiser here.
Posted by Peter Bond at 8:33 PM