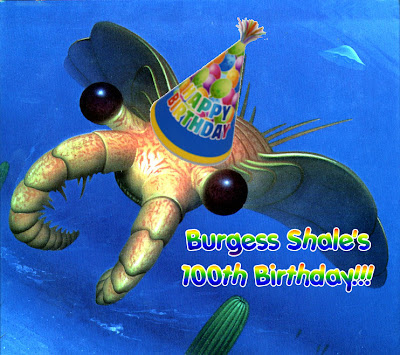 Photo credit: Yukio Sato. Cover of Simon Conway Morris' book The Crucible of Creation, minus the hat.
This lovely convergence of the space-time continuum allows us to celebrate Burgess Shale's centenary through the eyes of Anomalocaris and friends! Join us in the celebration by creating and sending in your birthday card, birthday cake, or drunk Burgess party photos!
Posted by Peter Bond at 9:18 PM