With the next fantastic gallery coming up in just over a month - the Pterosaurs, I am sure there are many artists out there (like me) unsure of the specifics of pterosaur anatomy and current scientific theory. I thought we'd like to start a series of posts that answer questions about pterosaurs, all with the hope of creating a more accurate and wicked reconstruction of these winged beasts!

I will start with a question I've been really curious about. Hopefully some of our members, as well as scientists-in-the-know, might help answer it - either in the comment section or in a new "answer" post.

The question is this: Where does the bottom of a pterosaur's wing attach to it's body? 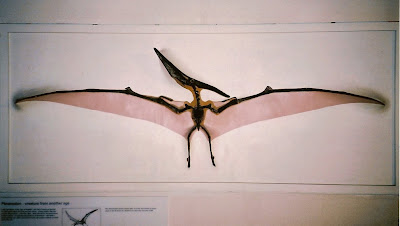 If this fossil impression at the London Natural History Museum is accurate (and real?), then it looks like the bottom of the wing attaches on the Pteranodon's leg at about the knee. I have also seen many life-restorations of pterosaurs with the base of the wing connecting at the hips and others where it connects at the ankle! Which is correct?

Are these artistic interpretations based on any fossil evidence? Is there a difference between earlier and later pterosaurs, or between different groups? 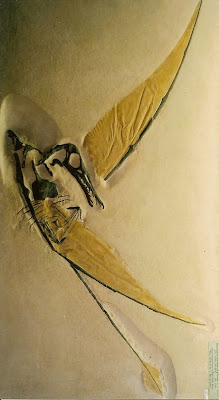 As someone trying to create an accurate reconstruction of these amazing animals, we need to know how their wing attaches! Thanks and I look forward to hearing from you.

Photos were taken by me in 2002 at the Natural History Museum in London.
Posted by Peter Bond at 11:38 PM